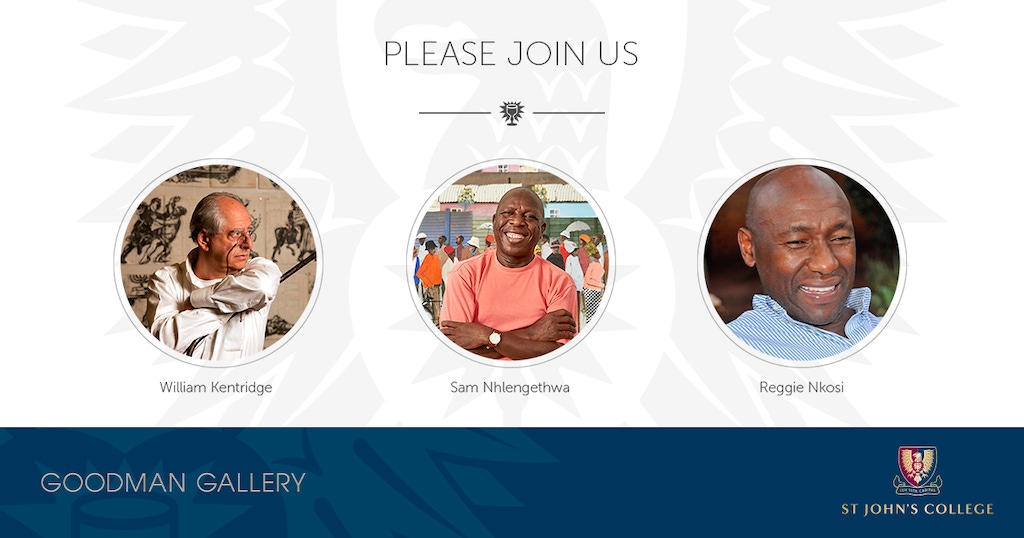 We have teamed up with the Goodman Gallery who has historically stood as a fierce defender of free speech dating back to its anti-apartheid activities when it was first established in 1966.

The conversations will unpack the role of art in championing social change and upliftment and the historic role the gallery has played in opposing discrimination.

Register before noon on Thursday 18 March 2021 to be part of the conversation.

The talk commences at 18h00 sharp. 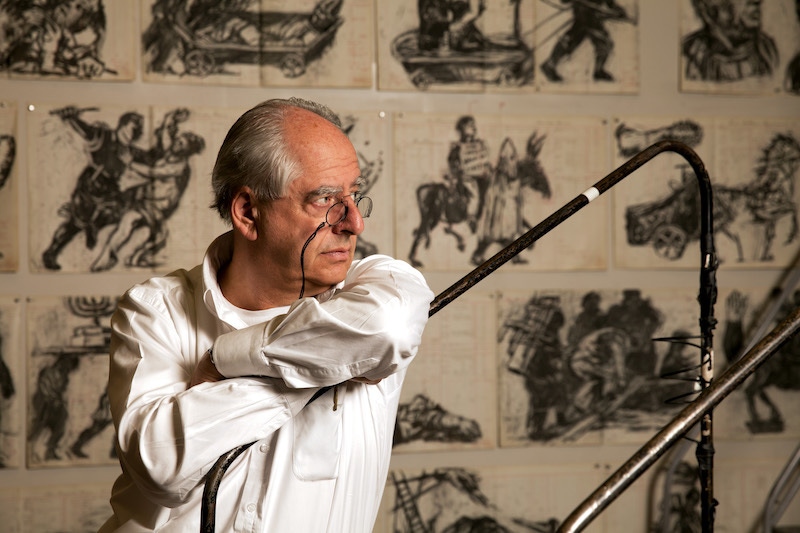 William Kentridge was born in Johannesburg in 1955 and is internationally acclaimed for his drawings, films, theatre and opera productions.

His method combines drawing, writing, film, performance, music, theatre and collaborative practices to create works of art grounded in politics, science, literature and history, yet maintain a space for contradiction and uncertainty.

Kentridge's work has been seen in museums and galleries around the world since the 1990s, and in 2016 he founded the Centre for the Less Good Idea in Johannesburg, a space for responsive thinking and making through experimental, collaborative and cross-disciplinary art practices. The centre hosts an ongoing programme fo workshops, public performances and mentorship activities.

Kentridge is the recipient of honorary doctorates from several universities, including Yale and the University of London. In 2010 he received the Kyoto Prize, and in 2012 he presented the Charles Eliot Norton Lectures at Harvard University. In 2015 he was appointed an Honorary Academician of the Royal Academy in London. In 2017 he received the Princesa de Asturias Award for the arts and 2018, the Antonio Feltrinelli International Prize. Most recently, he has been awarded the Praemium Imperiale in painting in Toyko. 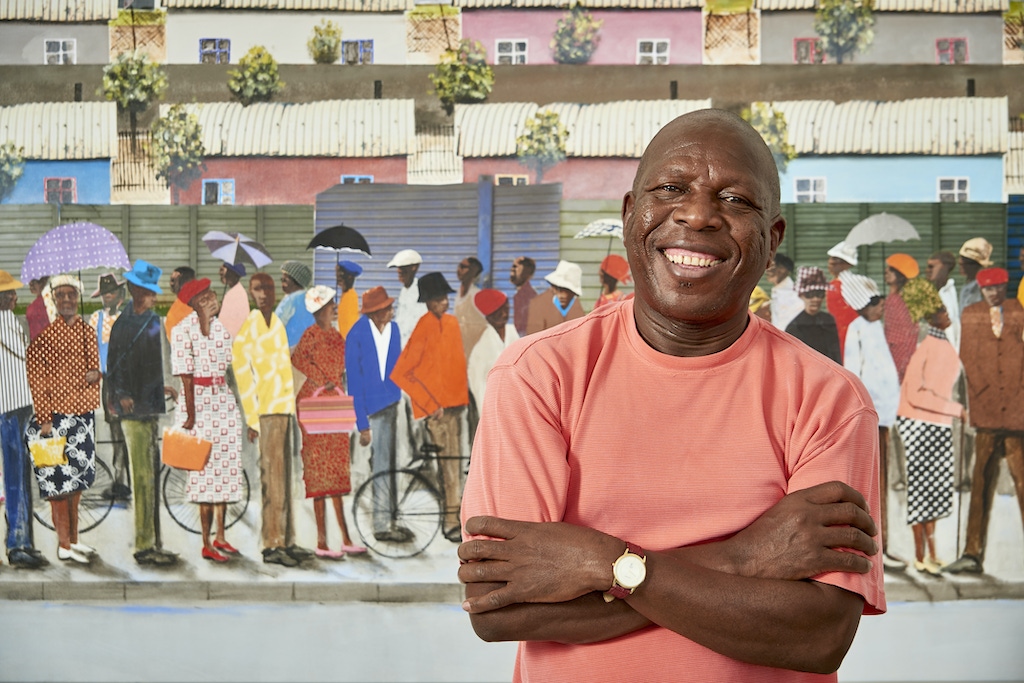 Sam Nhlengethwa was born in 1955 in Payneville near Springs, a satellite mining town east of Johannesburg and grew up in Ratanda location near Heidelberg. In the 1980s, he moved to Johannesburg where he honed his practice at the renowned Johannesburg Art Foundation under its founder Bill Ainslie.

Nhlengethwa is one of the founders of the legendary Bag Factory in Newtown, in the heart of the city, where he used to share studio space with fellow greats of this pioneering generation of South African artists, such as David Koloane and Pat Mautloa.

Despite Nhlengethwa’s pioneering role in South Africa art, his work has received rare visibility in London. A major survey exhibition, titled Life, Jazz and Lots of Other Things, was hosted by SCAD Museum of Art in Savannah, Georgia in 2014, which was then co-hosted in Atlanta by SCAD and the Carter Center.

Other notable exhibitions and accolades in South Africa and around the world include the prestigious Standard Bank Young Artist of the Year award in 1994; being included in the Whitechapel Gallery’s Seven Stories About Modern Art in Africa in London in 1995, and participating in a two-man show at Seippel Art Gallery in Cologne in 2000.

Other significant international group exhibitions include Constructions: Contemporary Art from South Africa at Museu de Arte Contemporanea de Niteroi in Brazil in 2011, Beyond Borders: Global Africa at the University of Michigan Museum of Art in 2018. Nhlengethwa’s work has featured on a number of international biennales. 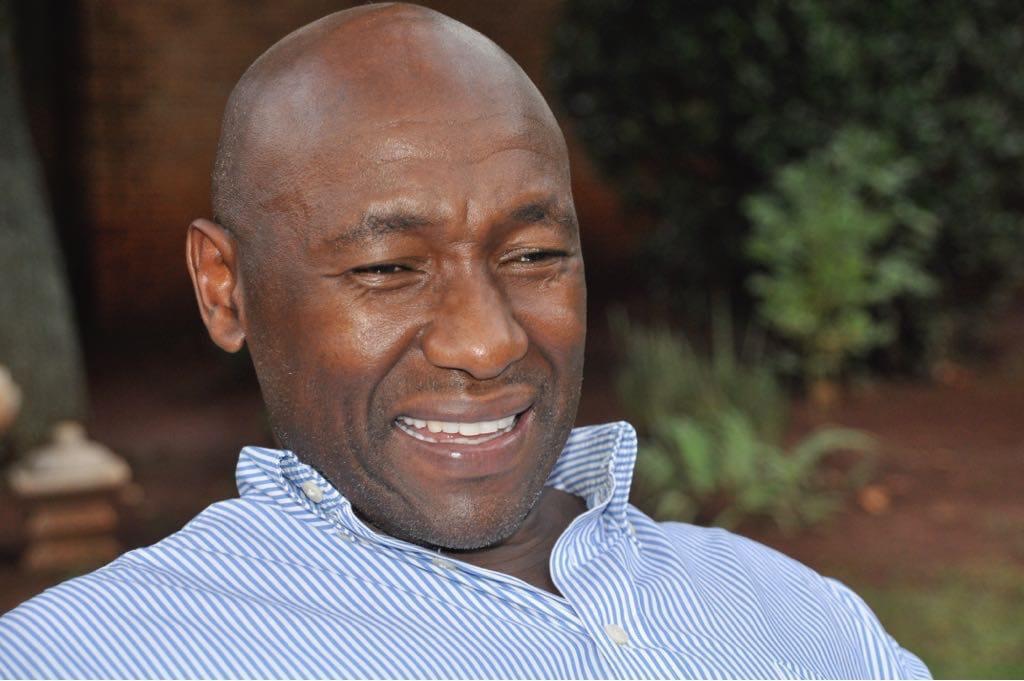 Reginald 'Reggie' Muziwadlile Nkosi was born in 1961 in Kwa-Thema near Springs on the East Rand of Johannesburg.

He was schooled locally and became politically active during his high school years, forming the Soquhubeka Youth Club in 1978. After school, he became very active in the local branch of COSAS where he was recruited to join the underground structures of the ANC.

It was while working closely with the Botswana front that his unit was arrested and charged with establishing units and furthering the aims of the ANC. Nkosi and his comrades were found guilty and sentenced to three years imprisonment.

After being transferred to Modderbee and Leeukop Prisons, he was sent to Robben Island Prison where he spent his time facilitating political education and literacy classes for his fellow comrades in prison.

He was released in March 1986 and with the state of emergency declared by June, he went underground, leaving South Africa through Botswana and Zimbabwe for the United States. He continued to work for the ANC student campaign and obtained his BSc Hons in Toxicology from Bouve’ College of Pharmacy at Northeastern University in Boston, Massachusetts.

It was here that he worked under Bra Themba Vilakazi, who was the head of the ANC and Fund for Free South Africa (FREESA). He acted as project coordinator for the local anti-apartheid campaigns and was also responsible for the TV and press briefings about South Africa. During the elections, he worked at the IEC in voter education in the Boston area.

On returning to South Africa in 1995, he worked for Lennon Medicine as a trainee product manager. He then joined the Healthcare division of Thebe Investments as a managed healthcare network worker. In 1997 he joined Bohlweki Environmental where he was responsible for the toxicological classification of hazardous substances. He also consulted on the drafting of the National Waste Management Strategy document and was a member of the Hazardous Waste Task Team.