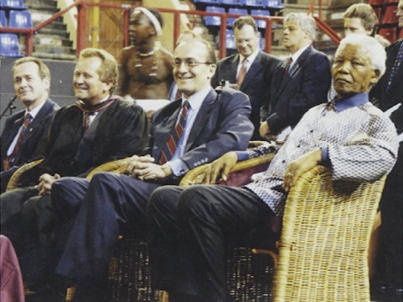 The Revd Roger Cameron, Michael Spicer and Nelson Mandela at Speech Day in 2003.

When I heard of Michael’s death on 10 March 2022, I was shocked and deeply saddened. It felt to me that a very articulate, thoughtful and wise voice of good reason has been taken from us so abruptly, and far too soon. Where Michael was, there is now silence and a void. My deepest condolences go to Ireen, Nicholas and Simon.

Michael was a true Johannian. The values of the College were foundational in his life. Michael always commanded respect, and even some awe at his deep and wide understanding of the economic, social, political and educational issues facing our country. It was good to have him as a member of the St John’s College Council and later as chair of the Council. He was never too busy to listen, and together with Ireen, he had a great love for the College. Both his sons, Nicholas and Simon, had very successful paths through St John’s.

As chair of Council for seven years, Michael was demanding and insistent on excellence and efficiency. He believed that St John’s College was a school that not only needed to provide an excellent education to all its scholars, but it also needed to be a leading school in South Africa and the world. I remember on one occasion when St John’s was hosting the International Boys’ Schools Coalition (IBSC) annual conference, Michael gave a talk to all the trustees on South Africa and its place in the world. It was superb, and even as a South African, I gained enormous insight through him into my own country. On other occasions when St John’s was holding its regular strategic planning sessions, Michael’s wisdom and deep insight was clear and valued. When there was a crisis, Michael was always available and present. On one particular occasion when the media were having a frenzied attack on St John’s, Michael, together with key members of Council and myself, formed a “war cabinet” to deal with the crisis and effectively managed the fallout. He was a busy man but always found time for engaging in the issues of St John’s. I will always be grateful for his deep commitment. I admired Michael for his acumen and respected him for his leadership and for his deep commitment to St John’s. He was driven and competitive and was confident of his own opinions. At all times, his decisions were based on sound moral principles.

It was not just in issues of governance and risk, but also in the everyday life of the school that Michael was present and engaged. Michael and Ireen were deeply committed to their sons and were regular supporters on the side of the rugby field and at the water polo pool. They were also very engaged in the centenary celebrations of the Old Johannian Association. They were a team, and with their sons, a strong family.

The relationship between a head and a chair of council is always an interesting and dynamic one. At one end of the spectrum is the chairperson who takes a friendly, indulgent and laissez faire approach, while at the other is a chairperson who wants to run the school and make operational decisions. Michael was neither, but he held you accountable when things went wrong. He was demanding and expected policy and strategy to be executed. He was not always easy to work with, but he was always ready to support when needed. Michael was an outstanding Chair of the St John’s College Council, and together with Mrs Margie Keeton, who was his deputy chair, they made a formidable team.

It was during Michael’s time as chair that we moved the school into a modern system of accounting and finances. The right people had to be put in place to ensure that the school was sustainable and making a profit, to then be reinvested in the school. Michael played an important role in this and was also a leading promoter of the Foundation, which under his leadership, moved to be a substantial fund for the benefit of the College.

One of the clear memories I have of time spent with Michael is when we were sitting on the stage at the annual Speech Day and prize giving with our guest speaker, the late President Nelson Mandela.

What struck me was that the evening captured a coming together, of an old colonial school - with all its privilege and excellence - and a new South Africa for all. Michael and I shared a vision for St John’s College that it should be a world-class Christian school in Africa. It was with the benefit of his wisdom and guidance that we began a transformative journey for St John’s, which shifted it from its privileged past to a school that serves as a model of excellence in South Africa, a school of the future.

Michael, may you rest in peace and rise in glory. - The Revd Roger Cameron, Headmaster at St John's College from April1999 to Dec 2014