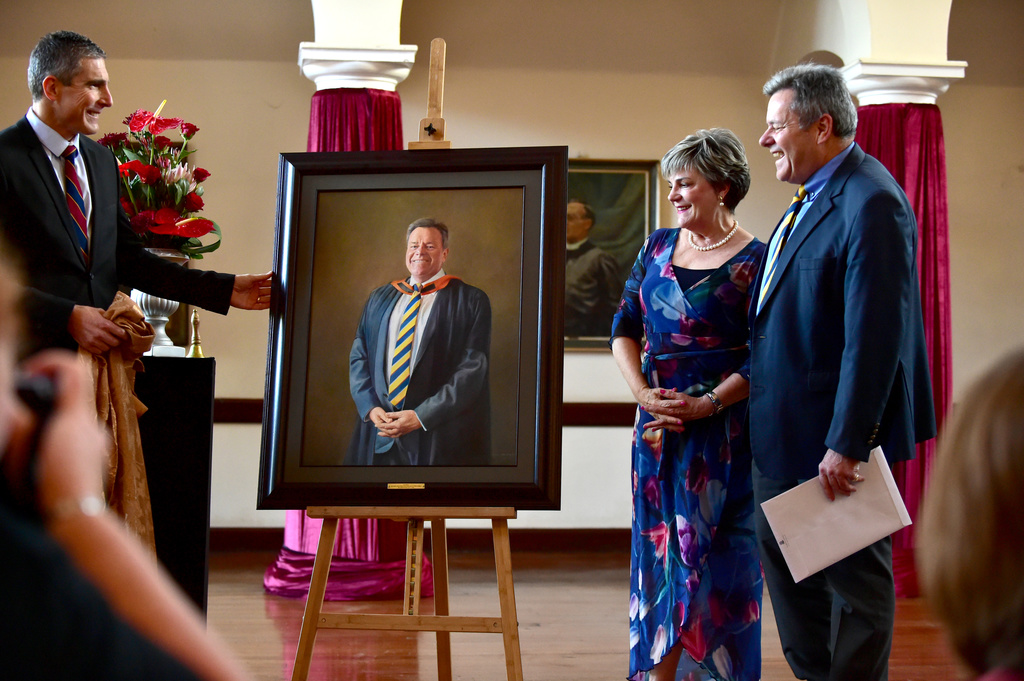 It is time to say goodbye. The last few weeks have been a series of lasts. The last Speech Day and Valediction, the last glorious Carol Service in the Cathedral of St Mary the Virgin, the last Remembrance Service in The Memorial Chapel with the laying of wreaths, the two-minute silence and the haunting playing of "The Last Post", followed by the more upbeat "Reveille". The Matrics have finished their last exam and have gone on Rage. They have left behind a pile of black shoes for charity as well as a splendid legacy of achievement. A new and exciting chapter lies ahead of them.

One of the country's most celebrated columnists Darrel Bristow-Bovey recently wrote an article in The Times entitled "The Dying Era of Tender Departures and Messy Goodbyes". In his column, he tells us that French philosopher Voltaire's response to being asked to renounce Satan on his deathbed, said: "I hardly think this is the time to be making new enemies".

I used to tell the boys in my History class that Admiral Lord Nelson, lying mortally wounded from a sniper's bullet at the Battle of Trafalgar, is reported to have said to his aide-de-camp Hardy, "Kiss me, Hardy". My history classes were invariably either bemused, moved or faintly disgusted by this farewell.

People ask me all the time if I'm counting the 'sleeps'. I have never counted the sleeps. I take the very slightest offence at the remark as if I'm a prep schoolboy counting down the days to the holidays or Christmas. Of course, these remarks are well intended, but leaving boys' schools after forty years is not a release. Boys' schools are magical places, full of energy, humour and some seriously crazy boys and eccentric staff. Boys never cease to surprise, and one must never become lulled into a sense of complacency and think all is well with the world because invariably something disastrous is about to happen. Boys have a clear understanding of justice, apart from when it comes to covering up for their own, even when the misdemeanour is heinous. The code of silence kicks in, lest admission causes the dreaded epithet "snitch" to be uttered maliciously in the corridors.

Boys' schools are places where boys are allowed to explore the full range of what it means to be a boy, without fear of embarrassment. Boys play the part of girls in school plays, they sing treble in the Chapel, they play glorious music, they produce plays that are challenging and art which provokes. They have the space to debate and to play chess. They do so because they love these activities. Lots of St John's boys are voracious readers and found snuggled up in the library reading books, and we all know that this is the secret to success.

Boys are naturally competitive. One only has to look at the results of our boys in the various Olympiads and on the sports fields as they aspire to better their previous best. This year, the U16 Rowing Quad did spectacularly well on a trip to some of England's most prestigious regattas. The open hockey and rugby sides excelled, with both the First Teams playing an attractive pattern which resulted in excellent results and provincial and national recognition for some. More importantly, it was how the boys played. They played for each other, and they showed grit and determination when down. Quite simply, they displayed character. Those hours spent at the water polo pool or going out to Roodeplaat to row requires excellent discipline, and these boys are taught to balance their schedules and organise their lives. It has been a joy to encounter so many different boys, full of character over the past forty years. Most of them are funny, largely forgiving, and uncomplicated creatures. What I always find interesting is how many boys who have battled at school, and have had to learn resilience, are often the ones who emerge as the entrepreneurs and leaders.

At the Pre-Prep Awards Ceremony on Thursday last week, the Headmistress Mrs Jane Lane made a superb speech about values, manners and traditions in a world of Trumpian fake-news, growing intolerance and polarisation. This brings me to a question: Why do you send your sons and daughters to St John's, and why do teachers choose to teach at St John's? The answer is that it may well be seen as an aspirational place in which to learn and teach. However, as a parent and as a boy, if it is merely for the social cachet of attending a school that is prestigious, beautiful and charges high fees, this is not a good reason. Is it because of the school's Anglican ethos and adherence to deeply rooted values captured in the words of the motto, Lux, Vita, Caritas? Is it because of character formation and an attempt to bring out the best in every student through a stimulating classroom environment and a wide array of activities including sports, cultural, camps, the Wilderness School and the Jozi experience? Is it about building young men rightly trained in body, mind and character who go out to lead through service? Perhaps it is a combination of all these reasons.

There used to be some debate about whether schools made a difference at all. A good school certainly makes a difference, and an individual teacher, coach or Housemaster can change a boy's life for better or worse. In his new book "Catching Tadpoles: the Shaping of a Young Rebel", retired ANC stalwart Ronnie Kasrils describes how liberal history teacher Teddy Gordon at King Edward VII School changed his life. Through his teaching of the French Revolution, Gordon took Kasrils down a road where he was determined to fight for a more just South Africa. Every boy needs at least one teacher he can rely on for support, objective criticism, a willing ear, and love.

Schools have changed enormously over the past forty years. Boys' schools are far less hierarchical than they were. Some might long for the old-fashioned traditions of fagging, the cane and a rigidly enforced hierarchy. I couldn't disagree more. St John's is a far gentler place than it was in the '70s and '80s and it is much better for it. It wasn't so long ago that boys were not awarded colours and honours for academic and cultural activities. Day Boys were not allowed into the quadrangles before eight o'clock in the morning or after two o'clock in the afternoon, and the choir was the domain of boarders only. Schools have also since opened up to all races, creating better and far more inclusive environments. Boys and staff from different backgrounds, religions and upbringings have enriched the diversity at St John's.

Over the past couple of years, we've worked towards building stronger links with the Old Johannian Association within South Africa and abroad. Professor Jon Patricios, Chairman of Council, and I recently returned from a wonderful evening with our OJs in London. What always strikes me at these OJ gatherings is how articulate, confident and sincere these young men and women are. They are crusaders. They are not content to inherit a world which is so deeply flawed. They are deeply concerned about the environment, and they have the skills and capacity to bring about change. They are confident in debate despite their relative youth. They are not content to sit and watch the world go by. They didn't quite say "Okay, Boomer", but it was close.

As I say farewell to St John's College and my teaching career, I would like to thank you for your support. To the parents, the enormous sacrifices you make to send your children to St John's College do not go unnoticed, and we must be mindful at all times to use the school fees prudently and to cut our cloth accordingly. To the Old Johannians, I hold up the example of the Class of 2004, under the leadership of Ronak Gopaldas, who clubbed together to support a Centenary student through St John's College. They mentor him and will continue to care for him beyond his College days.

To the young men and women of St John's College, I say take advantage of all the opportunities that are given to you at this superb school. Your school years are not the time to go into a deep adolescent funk; they are a time for involvement, energy and enjoyment. We need more activists, not self-indulgent narcissists staring at screens.

To the young men and women of St John's College, I say take advantage of all the opportunities that are given to you at this superb school.

The last two years have been happy and productive after the storm that raged at St John's in 2016 and 2017. We have emerged with a new sense of energy and purpose, with teachers who are prepared to challenge and stretch their students. Leading a school like St John's is a team effort, and we are very fortunate to have many outstanding teachers and administrators. I owe the Senior Management Team across the school a considerable debt of thanks for their support, wisdom and counsel. St John's must continue to aspire to be a more inclusive community and build on the Parent and Student Conversations that we have introduced, covering topics from race and gender to homophobia and identity.

We are fortunate to have a committed Council under the leadership of Professor Jon Patricios. The job of Council is to chart the strategic direction of the school, ensure that the finances are in good shape, and to appoint the Heads. It is all about serving and stewardship.

Finally, to the staff, both academic and administrative, as well as the grounds staff, kitchen staff and security personnel, I say farewell. I've enjoyed my interactions with you enormously, and have always had a sense that you are genuinely pleased to see me. My farewell, celebrated on 15 November, was a memorable occasion and Suzie, James, Richard and I would like to say thank you for your extraordinary generosity, love and support.

Finally, may I take this opportunity of wishing you all a most restful and safe holiday, a blessed Christmas and a peaceful 2020.

PS. If you see me lurking about the campus, darting from building to building next year, and you wonder if I am spying on you or not letting the new headmaster Mr Stuart West get on with his work, fear not. I will be joining the ISASA team in 2020 (their offices are on the St John's precinct) as the SAHISA Stakeholder Representative. What this means is that I'll be the interface between SAHISA (the Southern African Heads of Independent Schools Association) and ISASA (the Independent Schools Association of South Africa), supporting Heads in the often challenging job that they do.