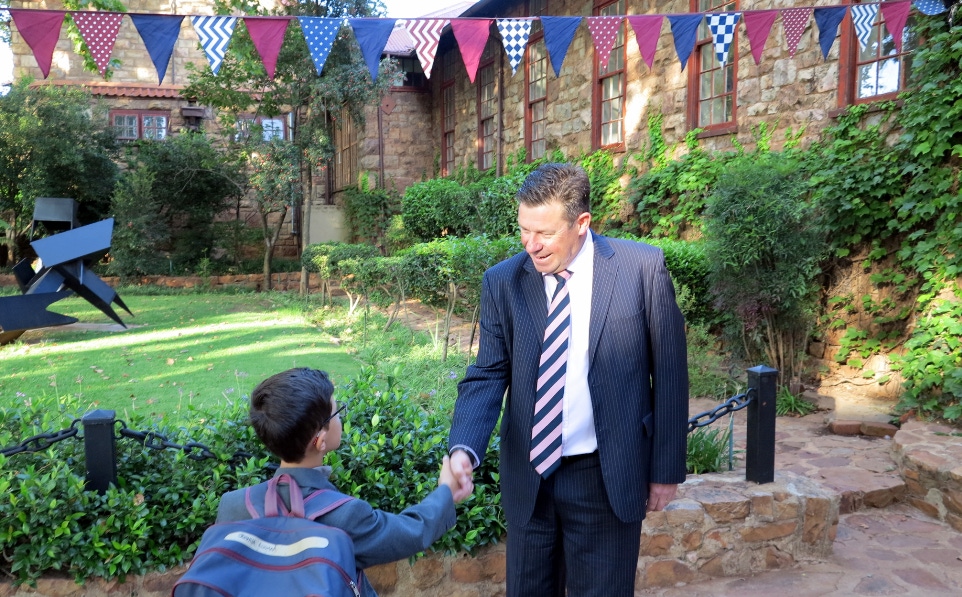 We say goodbye to Mr Patrick 'Rooster' Lees after 14 years of distinguished service to St John's College, ten of them leading the Preparatory School with distinction.

It is a great pity that this extraordinary time has prevented the St John's community from bidding Patrick and Sarah the send-off they so richly deserve. Still, we celebrate his profound legacy with gratitude.

Patrick arrived at St John's Prep from St Stithians as a young bright-eyed-and-bushy-tailed Second Master in January 2006. He was 34 years old, armed with a BA in English and Psychology, a PGCE, and about to complete his BEd Honours in Leadership Management. Patrick went on to register for an MEd at Wits and completed the Leadership Development Programme at Wits Business School. Within four short years, he was appointed Headmaster of the Prep, a position that he has filled with grace and distinctions for ten years.

Patrick is known for his energy, humour and his dedication - not only to the Prep but to St John's College as a whole. Patrick cares deeply about the children and adults under his care and leadership, and he shows this by building relationships, being a purposeful organisational changemaker and through embedding a culture of kindness.

Patrick has been vital in embracing transformation and a more inclusive approach at St John's, which he has done with great insight, enthusiasm and dedication. He established the various platforms for better communication and understanding within our community, including the lauded Prep Parent Conversation evenings. He appointed Mrs Dudu Mashele as his Deputy Head: Transformation and positioned the Prep as the leader in driving the agenda for change and creating a school of belonging for all.

Another significant achievement has been the founding of the Realema Teacher Intern programme in 2013. The programme continues to grow teacher interns into the wonderful young teachers that our country so desperately needs and today it boasts 12 graduates - all employed - with 35 new interns enrolled.

More recently, he established the Prep Academy, which has brought him a special joy. Following in the footsteps of the College Academy, the Prep Academy brings little boys in Grade 5 and 6 from neighbouring inner-city schools to attend lessons at the Prep three afternoons a week. His championing of these projects at St John's celebrates his transformative vision.

Patrick has also driven exciting curriculum initiatives at the Prep. His staff, under the leadership of Margot Long, have embraced these exciting new curriculum challenges, such as participating in the Harvard Visible Thinking courses and creating new Prep learning spaces. He championed the building of a new Pre-Preparatory School, and the beautiful, creative buildings that now house our smallest boys are a further source of delight to him. His commitment to continual educational innovation has further resulted in the construction of 18 new classrooms, an Innov8 Lab and a new Science Lab at the Prep, which will transform the quality of teaching and learning when it reaches completion during the Trinity Term. These buildings will stand as a wonderful testimony to a visionary educator and leader.

Patrick has held many prestigious positions during his career, including different leadership portfolios at SAHISA and ISASA. He is currently the Chairman of the SAHISA Central Region, easily the largest and most significant region in the country, where he has contributed his insight, experience and expertise. He has also been a member of the Masibambane Board for the past nine years.

Patrick loves sport and is a talented sportsman himself. His love of sport led him to redesign the Prep sporting curriculum, seeing the bigger role that school sport plays in a boy's life, building character and imparting great life lessons. The Prep has enjoyed some golden seasons with significant participation and success in squash, water polo and rugby. These changes engineered in the Prep have been cemented in many other Johannesburg schools through his Chairmanship of the SAHISA Sports Committee.

Patrick loves music. He shows prodigious talent on the trumpet and in singing. These talents have often been displayed at the annual Prep Speech Days where Patrick never fails to disappoint the assembly with a comic turn or a superb rendition of the national anthem on the trumpet. His sense of fun and nonsense have emerged with him dressing up as a superhero, performing on stage, and even taking to skydiving to deliver a recorded message to boys about facing their fears.

Patrick values his relationships with staff, parents and friends. He and Sarah are superb hosts, just ask their neighbours. Their home has been a place of refuge and a place of celebration for many in the community. Sarah has been his rock throughout Patrick's life, and her love and support have made it possible for him to thrive and flourish in everything he does. Pridwin Preparatory School is fortunate to be getting Patrick as its Headmaster, and The Lees family to bring their wonderful sense of team in creating that esprit de corps so necessary in any school, but especially in a stand-alone Prep school.

When asked about the highlights of his time at St John's, his list was long: "Being inducted as Head in 2010 by Bishop Brian Germond, founding the Realema Teacher Intern Programme and Prep Academy. My daughter Jess marrying Calvin in the Memorial Chapel. The whole transformation space. The new Pre-Prep and Prep buildings. My prize-giving speeches, including playing the trumpet, appearing as Superman and skydiving. Singing "We did it our way" on stage with Paul Edey. The staff ... and our staff parties. The ridiculous things that happened to me each year on my birthday. Acting in the school play - especially as Fagin in Oliver Twist. Being a Lay minister and every Chapel service and Mass with the choir. The Anglican tradition. And, most importantly, the boys, each and every day".

While we have been unable to formally say goodbye to them in person, the opening of the new Prep buildings will provide us with an opportunity to acknowledge one of the great Prep Heads.

Well done, thou good and faithful servant. Your energy and commitment shall be missed by staff and boys, and we wish you every success and happiness as you lead Pridwin Preparatory School in the years ahead.