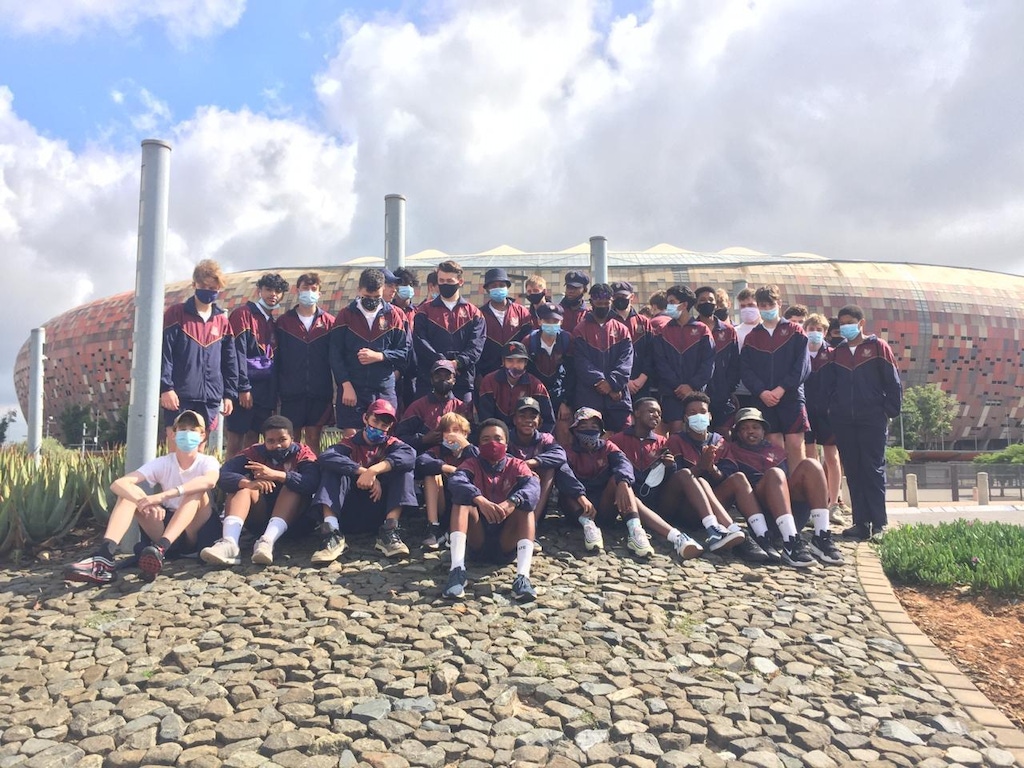 The LIVs at Soccer City

#JoziYethu is a magnificent programme enjoyed by the LIVs each year. It’s a week-long adventure, designed by Ms Anné du Plessis with the assistance of Ms Tracy-Lee Edwards, to teach the 21st Century skills that involve critical thinking, inspire curiosity, adventure, exploration and creativity.

The boys get to explore the ‘make-up’ of their city, from the beginnings of Johannesburg to the influx of migrants over the years, the consequences of this melange of people flocking to the city of gold, and the constant rejuvenation of the city that never sleeps.

Despite the COVID-19 restrictions, this year was no different, and our LIVs got to explore their city. 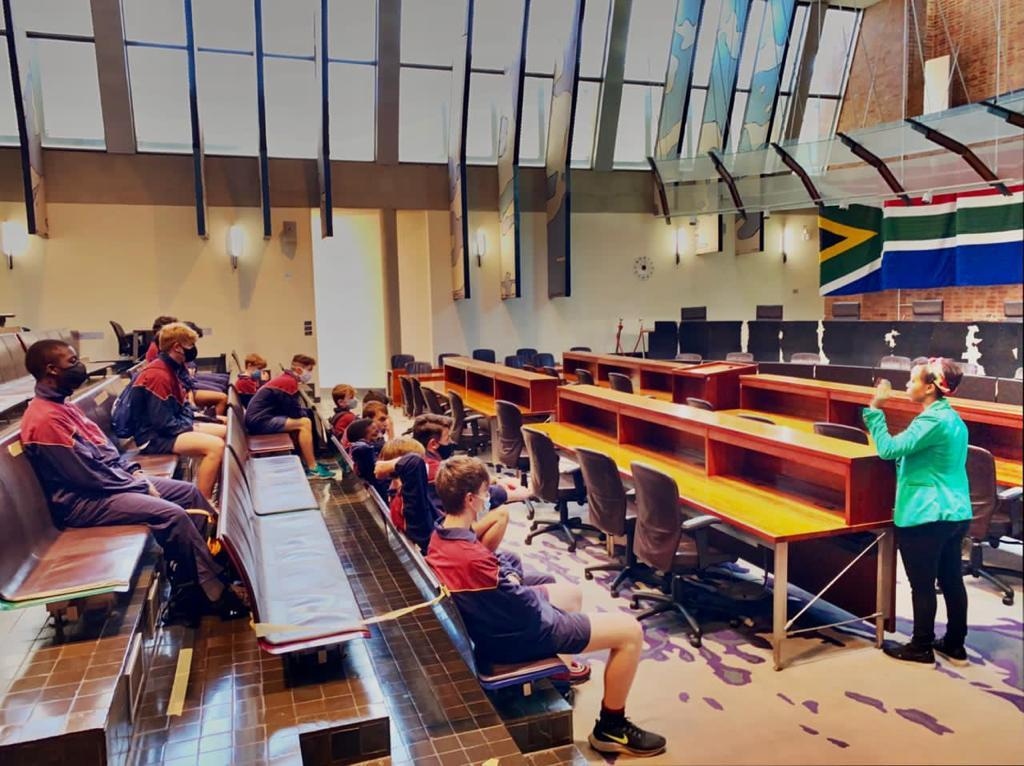 The Red Bus, Constitutional Hill and the Johannesburg Holocaust and Genocide Centre

The boys, with some volunteer teachers, caught Johannesburg’s Red Bus from St John’s College and did a short drive through Johannesburg providing the boys with an overview of the layout of the city and significant areas to visit before reaching Constitution Hill. Here the boys took in the sights and exhibitions that tell the story of our South African history in which injustices abounded on social, cultural and political levels. 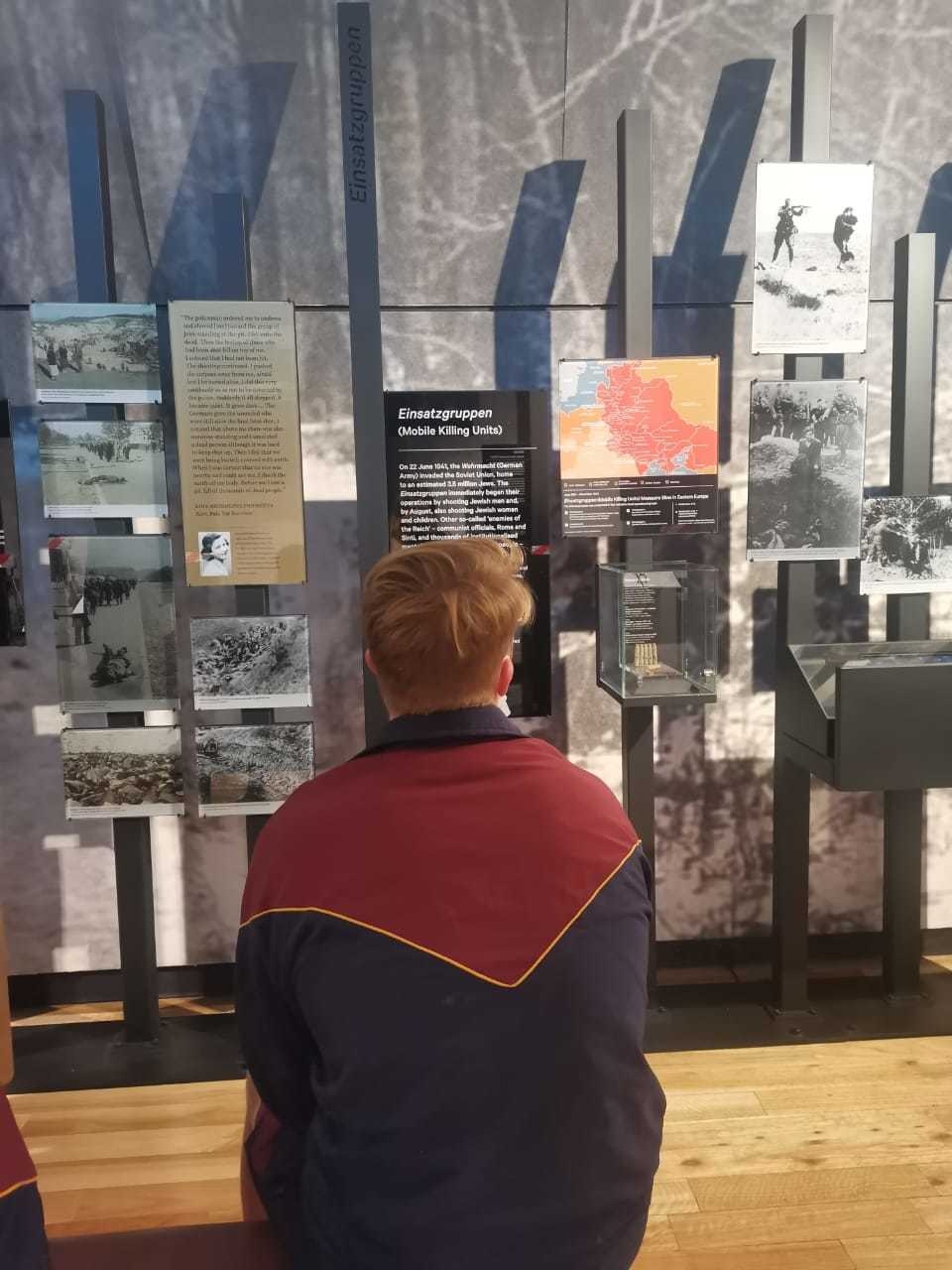 They also visited the Johannesburg Holocaust and Genocide Centre in Forest Town where they were welcomed into a video and talk session about the Holocaust and Rwandan Genocide.

As our boys study WWII, their knowledge of the Holocaust is insightful and mature. However, they were shocked to learn about the Rwandan Genocide, how recent it was and how it had happened so close to home. They walked through the beautifully and respectfully curated exhibition which brought these atrocities to life with the opportunity to ask questions. They also found themselves paging through books and looking at the clothing and photographs of those who were persecuted.

The Rwandan Genocide exhibition was particularly memorable and personal as one of the previous employees of the centre had travelled back to Rwanda to find the remains of his family. He returned, after having seen his mother's body, with the housekeys and rosary beads that were in her hands when she died.

The boys ended this visit in the Garden of Reflection, where they quietly reflected and on the injustices in the world, and how they could personally commit to making a difference.

It was then back on the bus to The Roving Bantu Restaurant to celebrate being South African. They enjoyed traditional cuisine in the garden while their host, Sifiso, shared stories about Brixton, South Africa and his personal adventures in a very different South Africa. 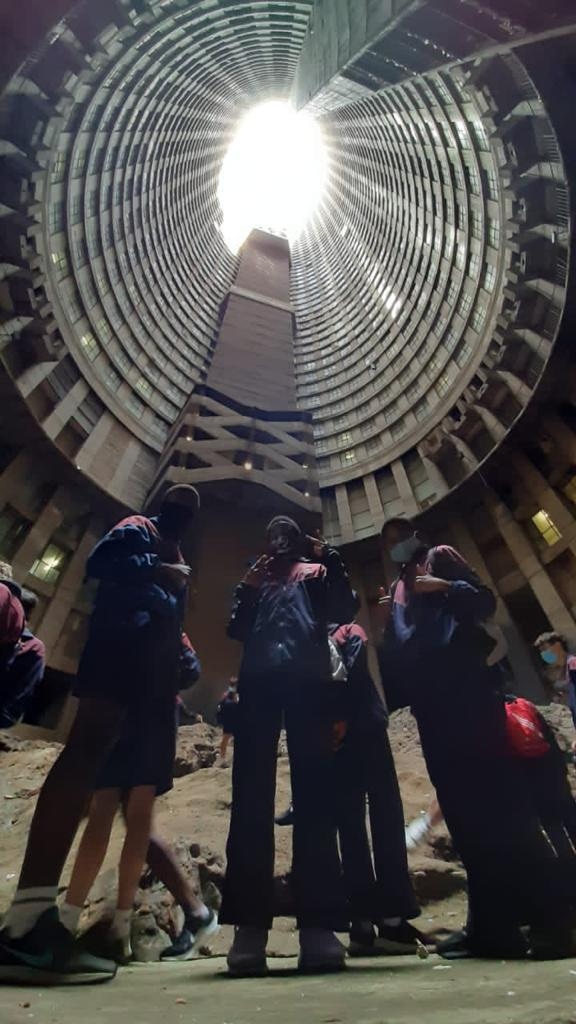 They boys walked through to the core of Ponte City, situated on the rock face that forms the ridge of Hillbrow, before climbing the stairs up to the 51st floor. The views from the top were spectacular, including the view of St John’s College just a few blocks away.

The groups then walked from to the Hillbrow Tower taking in the city streets and buildings along the way. They caught a taxi to Rocky Street in Yeoville, calculating their taxis fares and organising change for their fellow passengers along the way.

The highlight was arriving at the Yeoville Market where the guide provided the boys with a R10 note and challenged them to find bargain items on sale ... it was interesting to see what came back. The day ended with a traditional Cameroonian braaied fish and magwinya at La Camerounaise restaurant on Rockey Street. 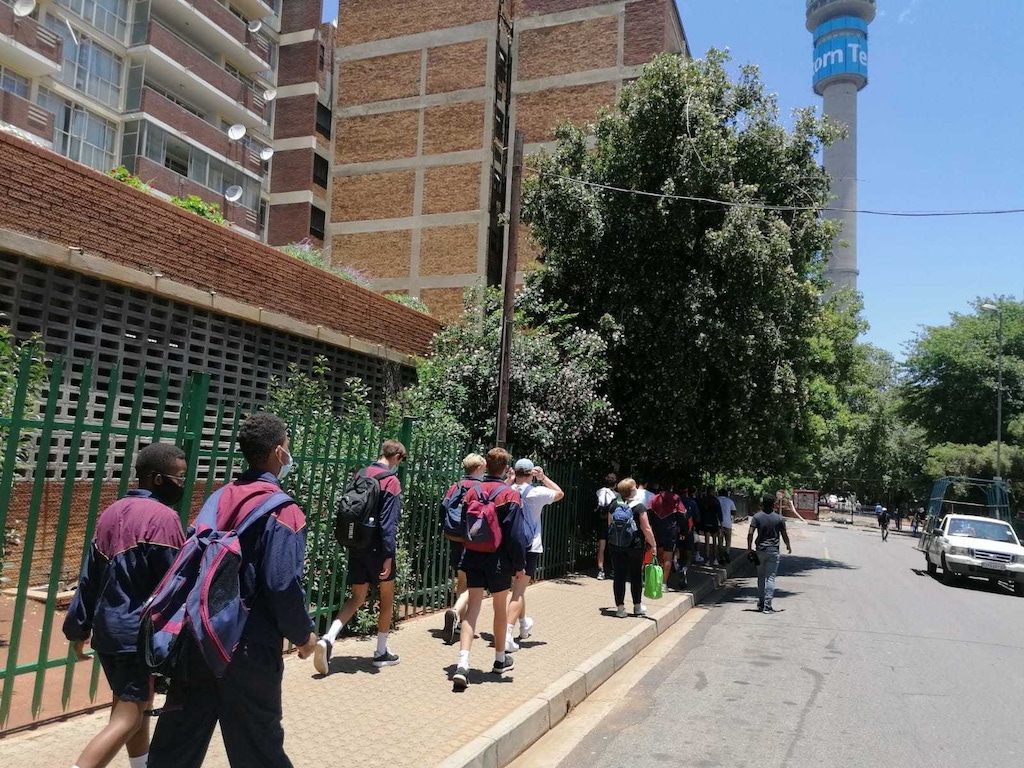 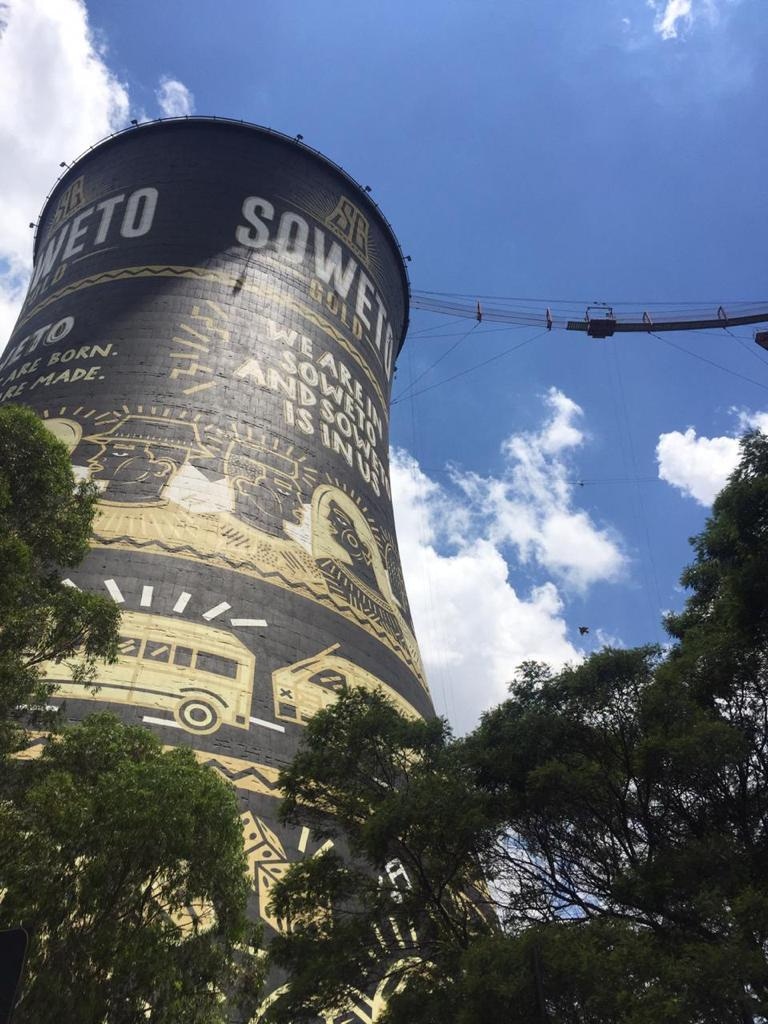 The Soweto tour was another highlight of the week. On the bus to Soccer City, the boys were given a historical overview of the South Western Township known as Soweto. After a brief stop at Soccer City, the boys were dropped at one end of Kliptown Informal Settlement, which was established 1903. A local guide, who grew up in Kliptown, shared the history and the challenges that are faced by the community who live there.

They then proceeded through Kliptown to the Kliptown Youth Centre. The youth centre offers vital support to the community, from food to courses in computer literacy. Their kitchen provides meals for more than 500 students from Monday to Saturday. The children collect a lunch box each day containing a sandwich which covers their breakfast and morning tea with a part of the sandwich often saved for dinner time. They also provide a cooked lunch. There is so much need in this community.

While the boys have learned much about June 16 and what happened that day, standing on the spot where Hector Pietersen was shot provided a profound moment of truth. They then walked on to the famous Vilakzi Street to see the homes of the two Nobel Peace Prize winners, former President Nelson Mandela and Archbishop Desmond Tutu. The day ended with lunch at Chaf Pozi at the Soweto Towers – a colourful and vibrant place.

“I hope that the boys have learnt something – even if it is only one thing that triggered their curiosity or challenged a perspective they have held. I hope that they will remember the stories. How Sifiso Nthuli as a teenager, in a split second, set light to the old South African flag and it changed his life irrevocably. How Mbuyisa Makhubu stopped and picked up a 12-year-old Hector Pieterson and became one of the most wanted youths by the Apartheid police,” said Ms du Plessis. “And I hope that these stories have helped to make our boys aware of how the past created the present but most importantly, how they can inspire them for the future.”