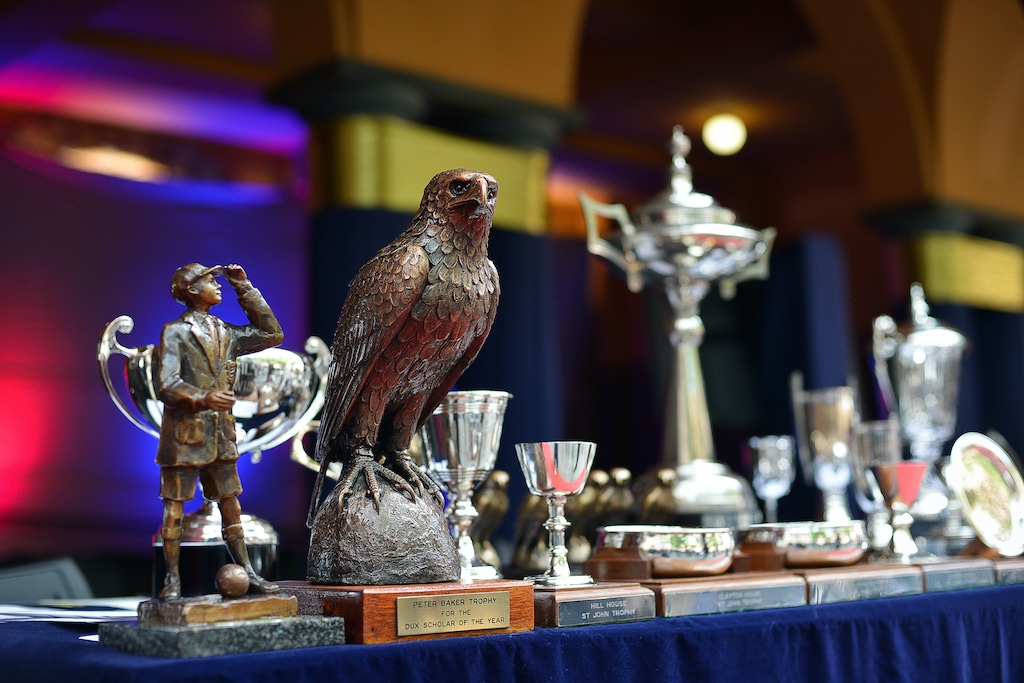 St John’s College celebrated Speech Day and a Valedictory Service for the Upper Vs and their parents and teachers at a wonderful event that took place at the College. Speech Day was presented in Pelican Quad, recognising and honouring our young men for their achievements over the past year, as well as their College career. The guests enjoyed performances by the music department, a rare treat this year, and our young men were welcomed to the Old Johannian Association with the presentation of their OJ ties.

A moving Valedictory Service in The Memorial Chapel followed Speech Day. An Olive Tree was blessed and will be planted on Long Walk with a plaque including the name of each matriculant to remember the courage and resilience shown by this Class of 2020.

After the service, our young men and their parents enjoyed their last evening together under the twinkling lights in David and Tutu Quads. It was a wonderful celebration and an appropriate manner of saying goodbye to our young men as wished them well in their final matric examinations. 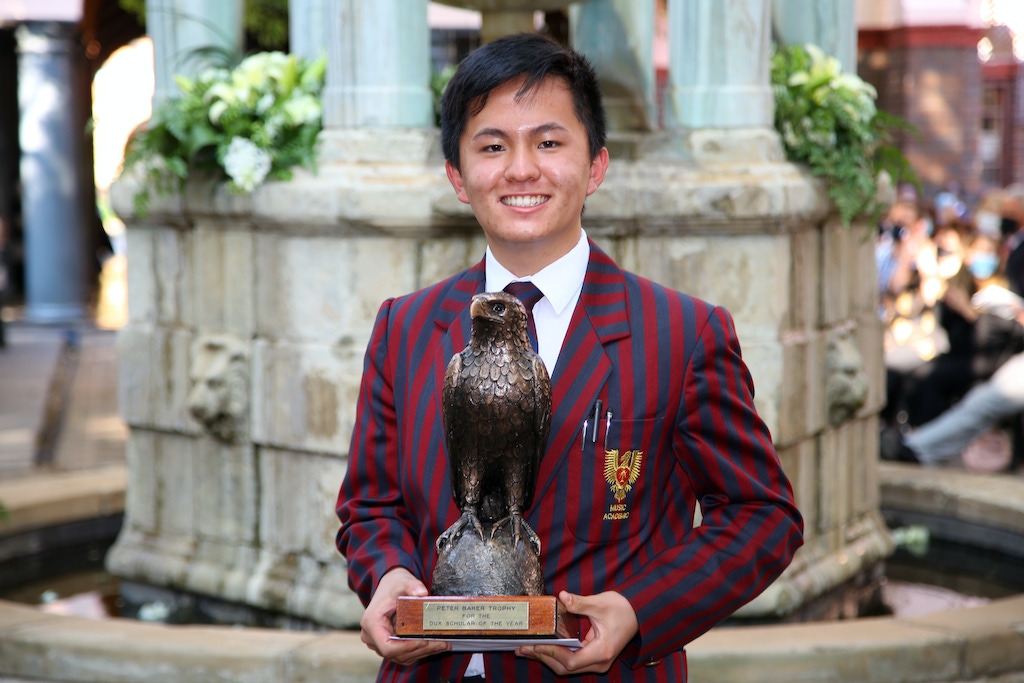 Andi Qu was the recipient of the Peter Baker Prize for the Dux Scholar of the Year. He was also awarded the Innovative Thinking Award donated by Meg and Ken Fargher, as well as School Prize for the Best Instrumentalist and the Old Johannian Association Award for representing South Africa in Mathematics, Computer Science and English Olympiads. He received a Subject Prize in Advanced Programme Mathematics, German, Life Orientation, Mathematics, Music and Physical Sciences.

Andi is intellectually curious and has a passion for mathematics and computer science. He is motivated, focused, dedicated, proactive and humble.

Andi loves solving problems with elegant solutions and then creating and implementing the solution.

He gives of himself to assist his peers, and has tutored with great success in the St John's College Academy.

He has contributed to various open source projects and developed software for Apertium which is an organisation that creates machine translation for under-resourced languages where machine learning (like Google Translate) doesn't work well. 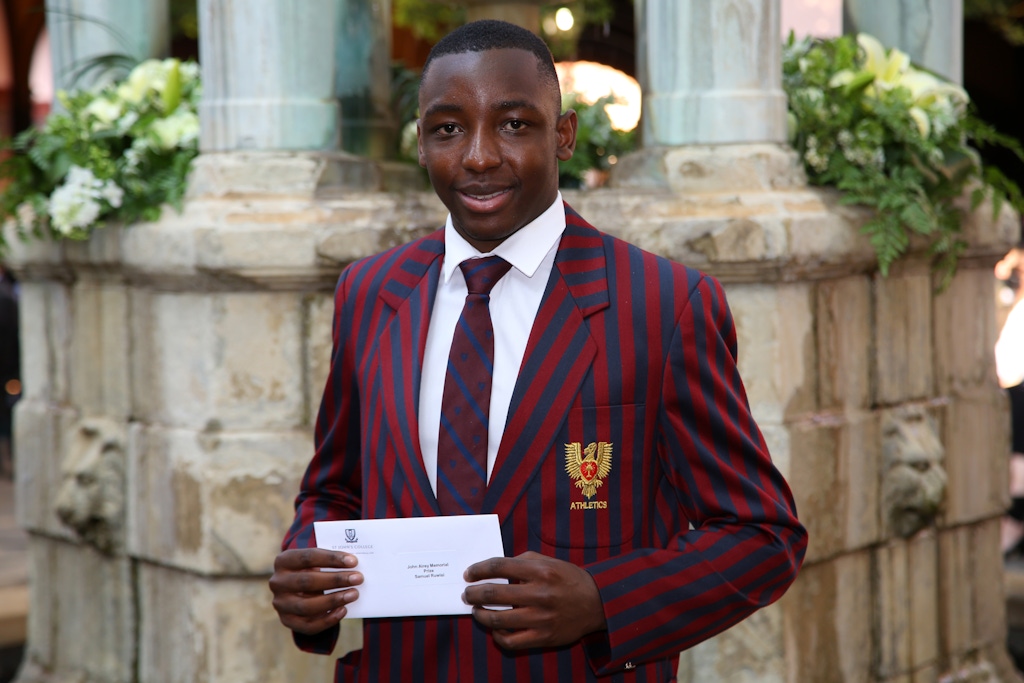 Samuel Ruwisi was awarded the John Airey Memorial Prize for his outstanding extramural contribution during his College career.

Samuel has played First Team Cricket, First Team Rugby and was a member of the Athletics A Team.

He has earned Honours for Athletics, Colours for Cricket and was selected for the Zimbabwean National U19 Team to participate in the U19 World Cup last year.

Samuel is a House Prefect in Hill and has been a wonderful role-model to the boys at the College. 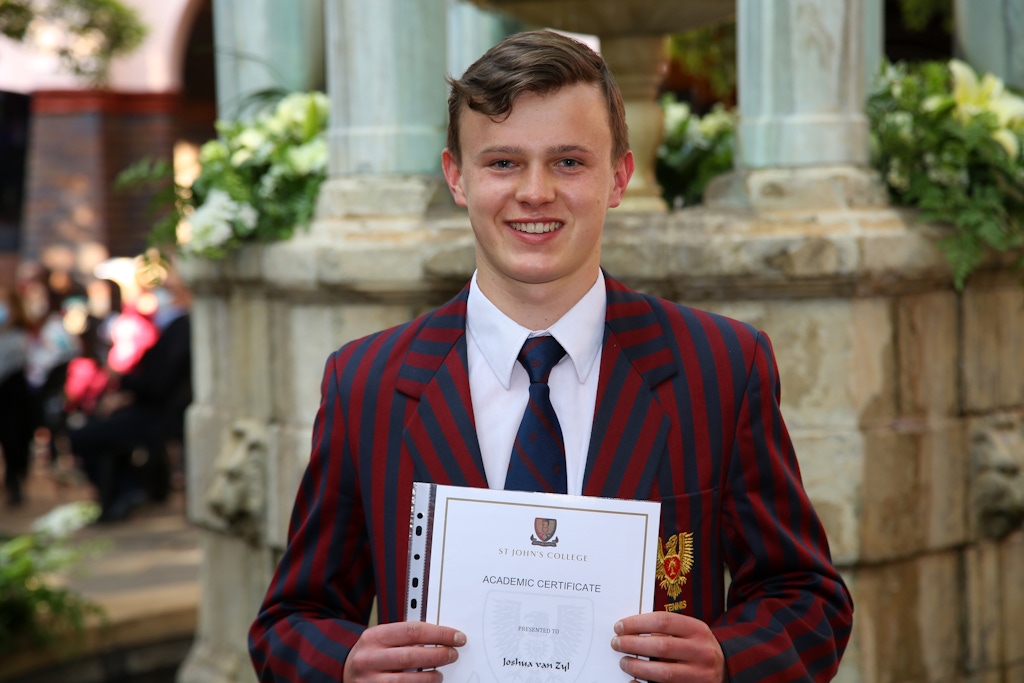 He has Colours in Music and was a member of the College Symphony Orchestra, the Wind Band, the Clarinet Ensemble and the Jazz Band. Joshua also holds a Team Blazer for representing the College in Chess.

Joshua was Head of Clayton House and is recognised for his high standards of excellence that he has achieved in all areas, a worthy recipient of the 2020 Walter Andrewes Prize. 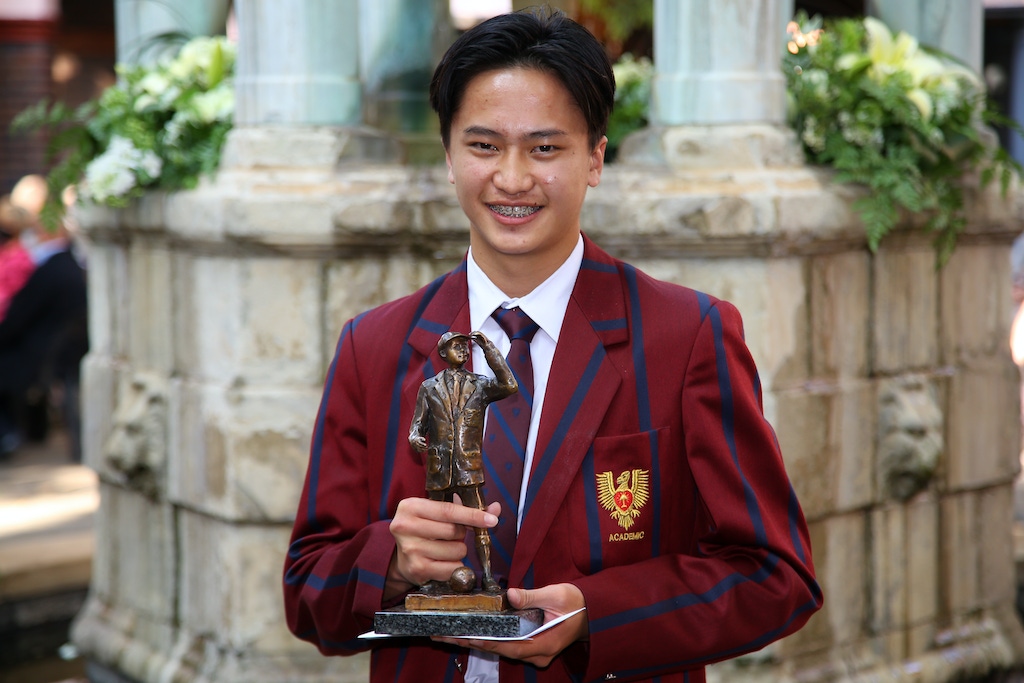 Matthew Chow received the Aquila Alta Award as the boy who, rooted in St John's from the very beginning at Pre-Prep, has been nurtured and given the wings to fly as he leaves the College.

He is a matric student who has shown consistent commitment and has excellent personal qualities of integrity, dedication and kindness, and can lead with distinction and uphold the values and traditions of St John's. 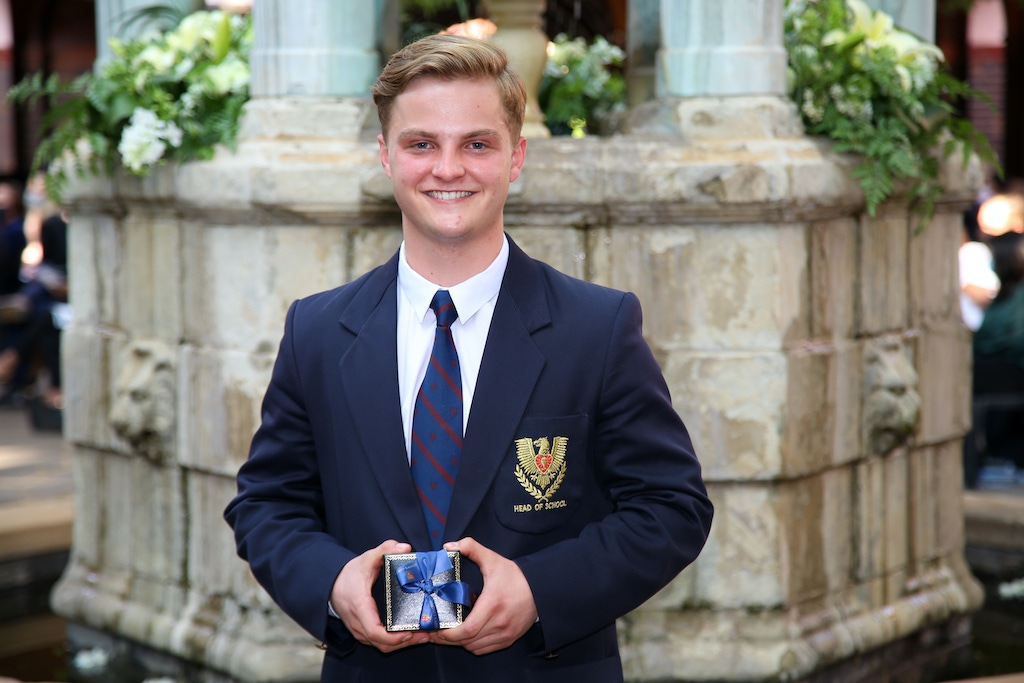 The Alan & Gen Wilcock Medal is presented to a matric student who has shown courage and resilience in the face of adversity.

The Matric Class of 2020 has been resilient, adaptable, motivated and shown courage as the pandemic has challenged them, and buffeted their final year at school. Through all the changes they have retained their spirit, and positive attitude. They are deserving recipients of this year's Alan & Gen Wilcock Medal. 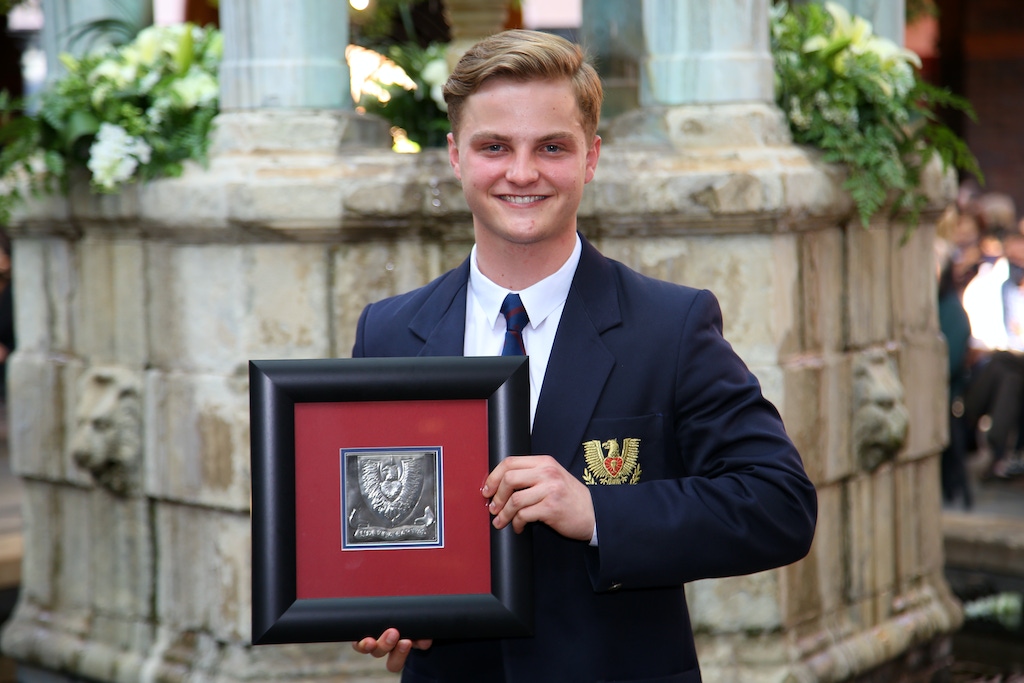 Neal Burger, Head of School, was the recipient of the Old Johannian Memorial Prize for Service to the School.

This young man has been a pillar of strength in these uncertain times and led the College with a commanding humility and dignity, a steadfast courage and a great love for the heritage of St John's. His inclusive and positive leadership has been the binding strength of the prefect team and the Upper V class. 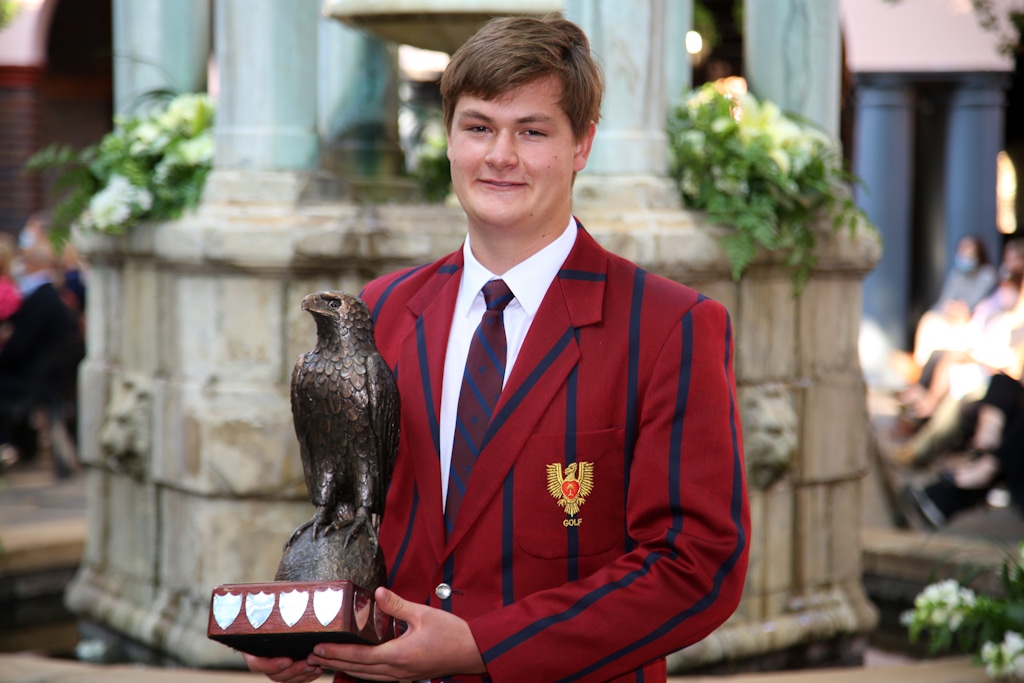 The OJs OJ Award went to Joshua Sansom. This is an award that is voted on by the Matric group. The awards goes to the young man who, in the opinion of his peers, will be the most successes not because is a top academic or sportsman, but because of his qualities of honesty and integrity. A young man who exemplifies Lux, Vita, Caritas. 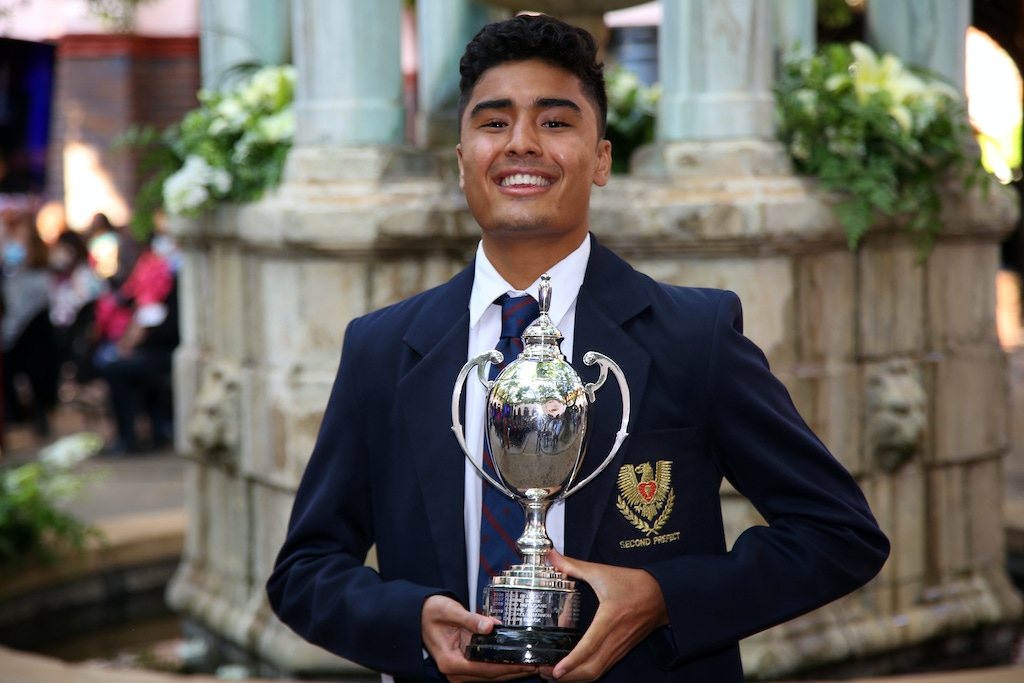 The Headmasters' Trophy was awarded to Daanyaal Ballim, Second Prefect.

This award is presented by current Headmaster, Stuart West, and has been presented by six of his predecessors - Mr Paul Edey, Revd Roger Cameron, Mr Alan Wilcock, Mr Robert Clarence and the late Messers Walter Macfarlane and Jan Breytenbach.

This award goes the matriculant who in the opinion of the headmaster most embodies and embraces the College motto of Lux, Vita, Caritas.

Daanyaal Ballim is a young man with a deeply compassionate heart. His social justice drive is seated in his resolute faith, foundational personal beliefs and his fierce determination to use his privilege to make a difference in his wider community.

He co-founded #BoysForAction in August 2019, a boys' school imitative in Johannesburg to raise the consciousness among young men and bout gender-based discrimination and violence, raise funds to support the health of destitute young women, to encourage social dialogue between boys' and girls' schools and to respond to the devastating impact of COVID-19 among the city's poor, distributing food parcels to the most needy.

We owe this young man an immense debt of gratitude as a school for leading and raising awarness within our own school community to key social justice and community issues. Daanyaal Ballim is a deserving recipient of the Headmasters' Trophy. 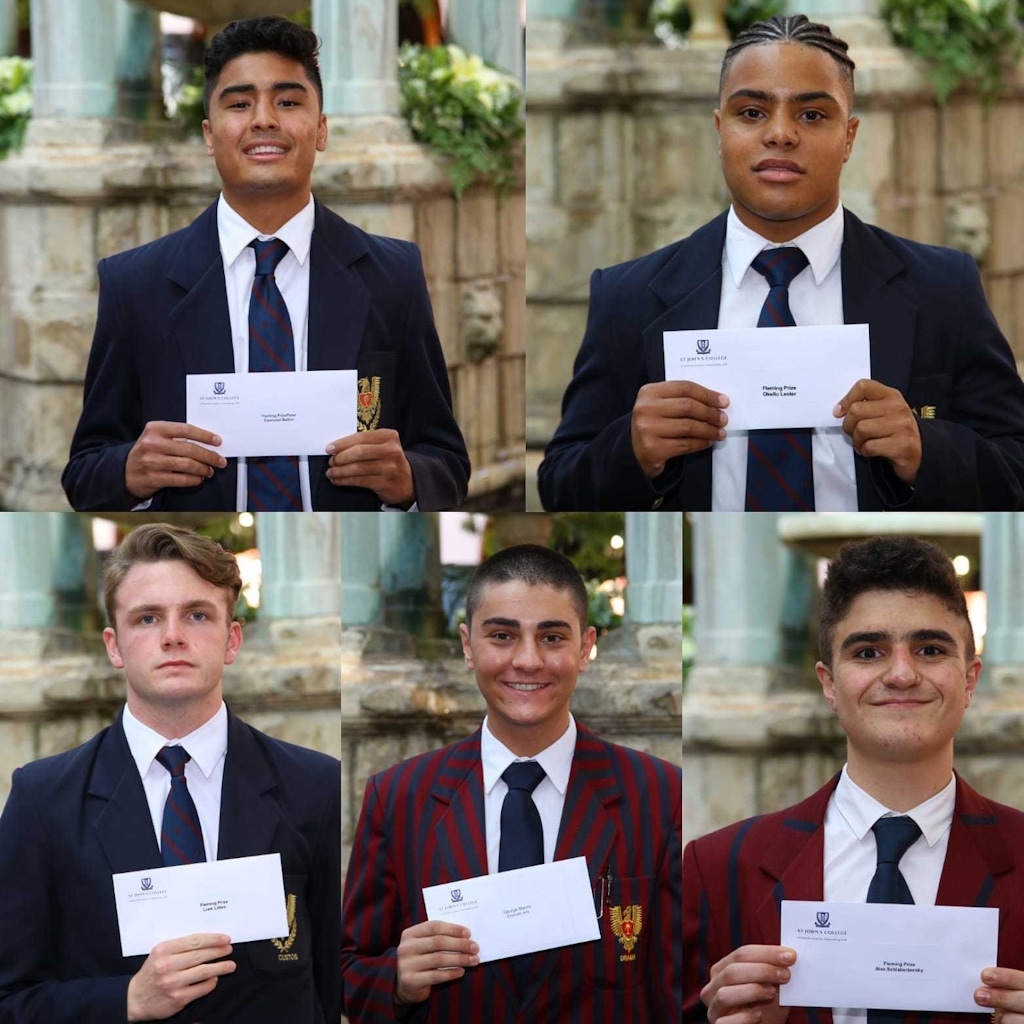 The Fleming Prize for Outsanding Service to the School by a matric pupil who goes beyond the service expected of him in any role he may hold, was presented to five worthy young men this year: Daanyaal Ballim, Okello Lester, Liam Litton, George Macris and Alex Schlapobersky.

Download a full list of all the awards, and the programme from the Upper V Speech Day and Valedictory Service, below. For more photographs from the occasion, visit our Facebook Page.