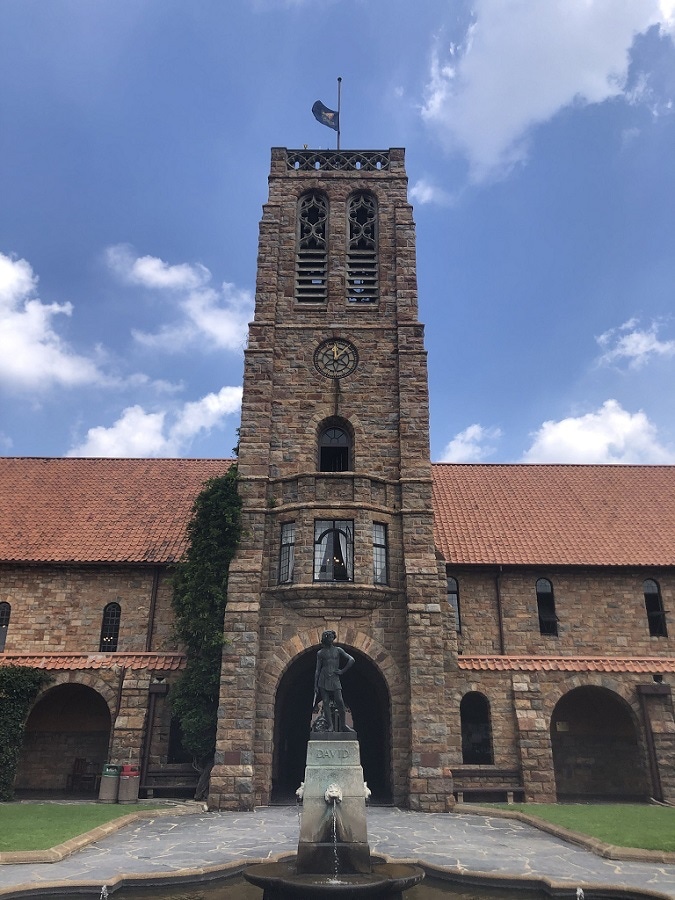 The flag flies at half-mast from the Bell Tower today as we learn of the passing of Old Johannian Michael Spicer (Thomson 1969, Sixth Form 1970).

Michael epitomised the values and ethos of a true Johannian in his life of service to others, with his contributions evident through his many initiatives and solid leadership throughout his life. He devoted himself to promoting responsible business leadership and championing ethical business practices to facilitate a fairer society in South Africa. His legacy will remain a shining example to all Johannians, present and future.

He joined St John’s College in 1966 and matriculated in 1969, before completing a post-matric in Sixth Form in 1970 where he was Head of Thomson. He attended Rhodes University and read a BA in English and History, followed by a BA Honours in History. He returned to St John’s College in 1975 where he taught English and French until the end of 1976.

In 1977, he married his wife Ireen in The Memorial Chapel, before returning to Rhodes on an Ernest Oppenheimer Scholarship to read his Masters in History, which he received with distinction.

He joined Anglo American in 1985 and, through his position as Deputy Chairman of the Consultative Business Movement (CBM), was intimately involved in South Africa’s transition to democracy. The CBM was appointed as the secretariat of CODESA, the forum set up to negotiate the new constitution for South Africa. Michael also facilitated the last-minute agreement by Chief Mangosuthu Buthelezi to participate in South Africa’s first democratic election in 1994.

After 1994, Michael continued to play a significant role in business in South Africa, rising to the position of Executive Director of Anglo American in 1998 and then Executive Vice President in 1999 when the company was listed on the London Stock Exchange.

After retiring from Anglo in 2005, he became the CEO of Business Leadership South Africa (BLSA), an influential association of the CEOs of South Africa’s top 100 companies. In 2011 he retired from BLSA and held several non-executive directorships, including Chairman of Anglo American South Africa. He worked with the Brenthurst Foundation and was Chairman of the Rhodes University Board of Governors.

Michael joined the Council of St John’s College in 1999 and was elected Chairman in 2001, a position he held until the end of 2007. He was also a former trustee of the St John’s Foundation and the recipient of the Golden Eagle Award in 2013.

His two sons, Nicholas and Simon, matriculated from St John’s with seven distinctions each.

Michael’s life demonstrated and encapsulated the College motto of Lux Vita Caritas in everything he did. Our thoughts and prayers are with Ireen, Nicholas and Simon at this time of profound loss.

Michael Spicer brought a number of key qualities to his work as Chairman of the Council of St John's College. He was a total professional, he had an eye for detail as well as the bigger picture, and he was a dedicated Old Johannian. Under his chairmanship, meetings always ran to time, the agenda was managed with great skill and informed debate was encouraged. For some staff called to present to Council on a specific topic, I think he could be quite forbidding, but if you had mastered your field, you could expect a lively and engaged hearing.

Members of Council Executive dedicated their time and wisdom generously and I remember well the first Friday of every month Exco meetings in the Headmaster's Office. Much of this focused on new building plans where Michael drew on his experience of how successful school capital projects were delivered across the country by the old Anglo American Chairman's Fund.

Margie Keeton was a friend and colleague of Michael Spicer for more than 40 years. They worked together at Anglo American, she was his Vice-Chair on the Council of St John's College and joined him on the Rhodes University Board of Governors.