The tournament took the format of pools battling it out to see who would qualify for the knockout stages. Pool winners then went on to face each other in the quarterfinals, before advancing to the semifinals and finals to uncover the 2022 champion.

It was a great weekend in the pool for the St John’s College boys who produced incredible results as they won all six of their games and claimed the tournament by beating the much-respected SACS 9-8 in the final. The glory did not end there as Matthew Pryce was also named Attacker of the tournament, after his consistent showing throughout the competition. Other members of the St John’s College team that were rewarded for their individual efforts and standout performances were Tigran Sennett, Jared Shapiro, Matthew Pryce, and Luka Rajak, who were all named as part of the Team of the Tournament.

St John’s College Water Polo Head Coach Vlado Trninic was pleased with the boy’s performance over the weekend: “I’m very proud, privileged and honoured to be able to coach this group of brilliant young men. Credit must also go to Mr Nicholas Rodda and all the other St John’s College Water Polo coaches who have coached these boys over the years. Without them, no success would have been possible. The First Team played some fantastic Water Polo and have shown great character throughout the season.”

The tournament sees a break in the Water Polo season until it resumes in the Michaelmas Term. We look forward to hosting prestigious tournaments like these on home soil as we get closer to breaking ground on the new St John’s College Aquatics Centre. To find out more about this exciting project, or how to become involved, please email [email protected]

Attacker of the tournament: 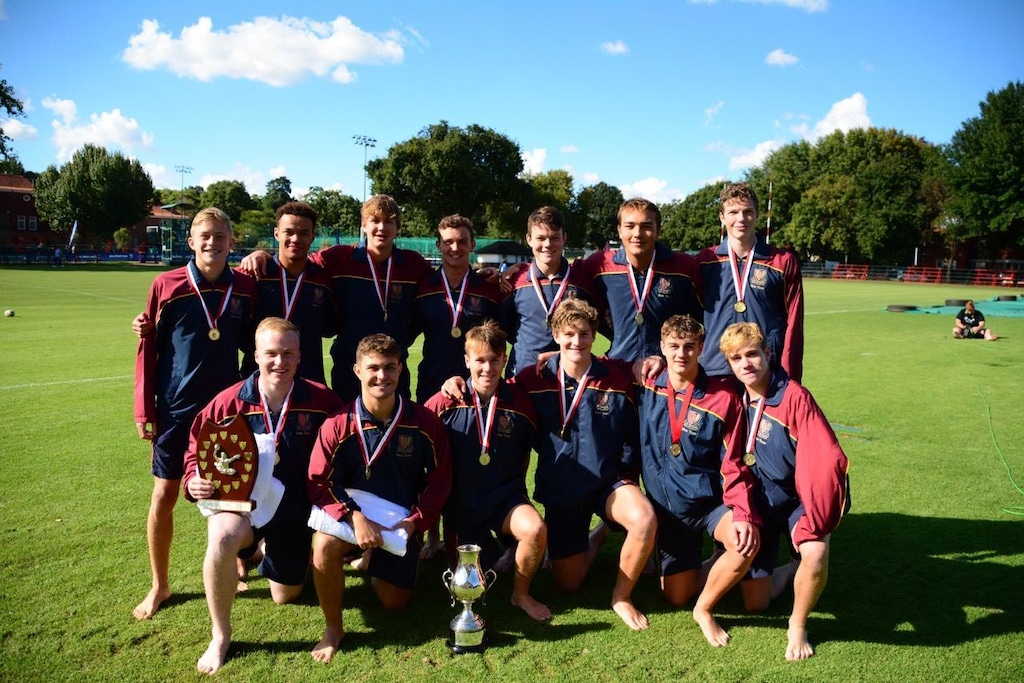 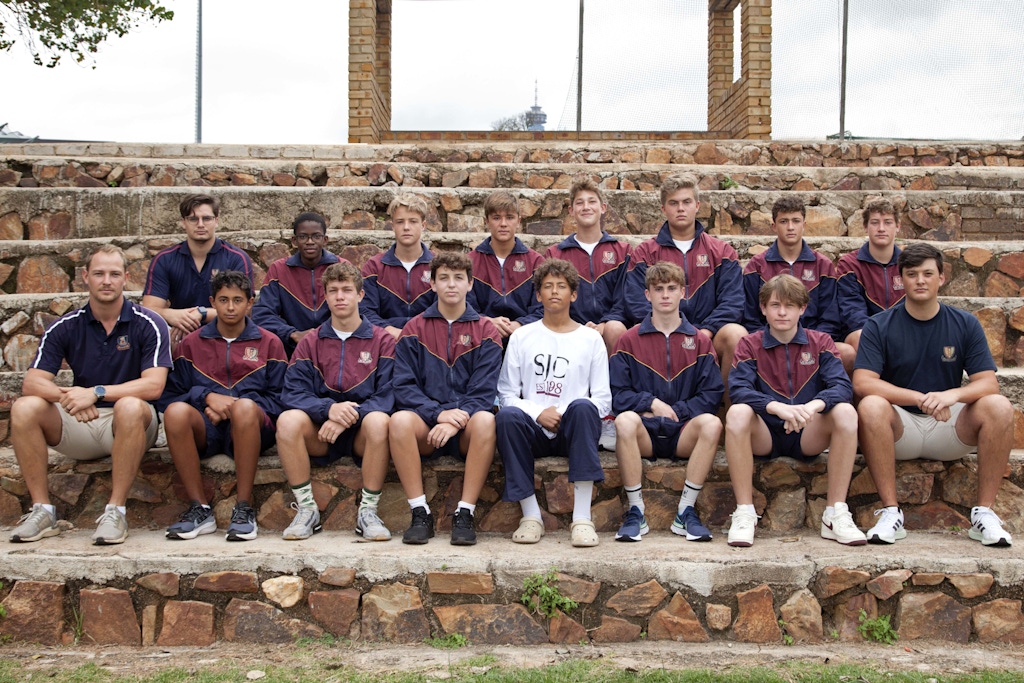 St John’s managed to pick up four wins from the four pool stages, seeing them advance to the quarterfinals. The boys met Bishops Diocesan College in the quarterfinals, claiming a hard-fought 5-2 victory. The semis saw the action heating up as the pick pitted St John’s against neighbours King Edward VII School, where our boys rose to the occasion with a 7-4 win over the old rivals.

The final match-up was between St John’s College and Selborne College , where our boys narrowly lost with a final score of 3-6 to secure the second spot in a tournament that featured 22 teams.

Jeppe High School for Boys hosted the 2022 U14 Ken Short Water Polo Festival over the weekend, with plenty of friendly fixtures played between schools from around the country.

The festival is always a great way to end the first term season as our with U14s boys get to play teams they don’t get the opportunity to play against during the season. And with the festival format, the weekend's winner is water polo and not any particular school.

The St John’s College U14 team participated in eight games but only played seven after their fixture against St Alban’s was called off. They managed to win three games, lose two and draw two. The weekend was great for all, with lessons learnt and memories that they will carry through their water polo careers at school. 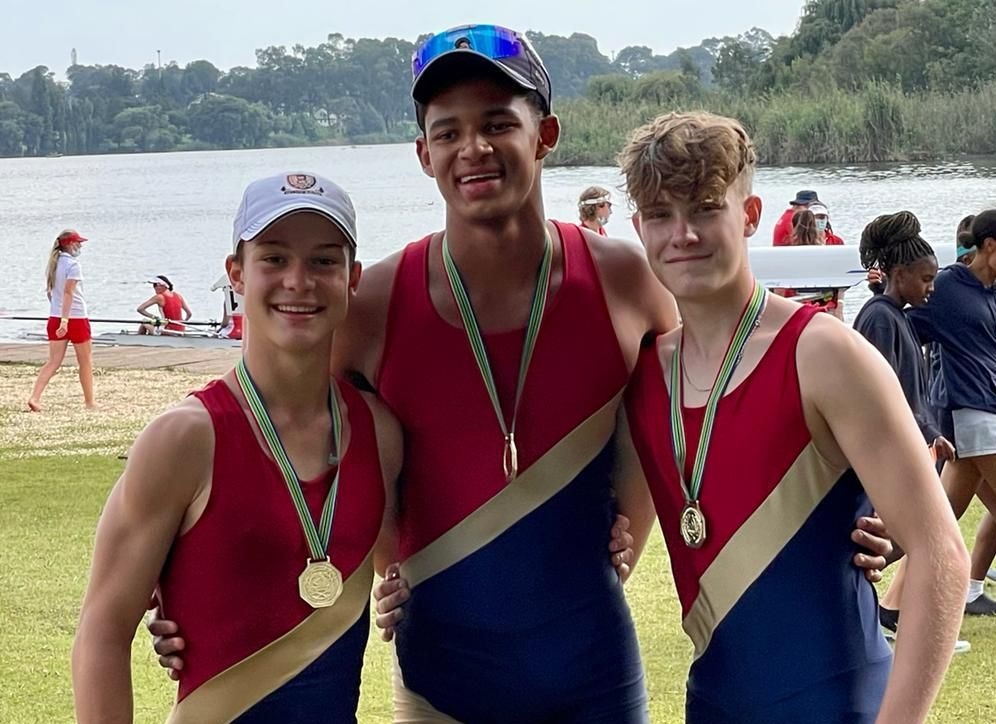 The 2022 South African Schools’ Rowing Championships took place over the past weekend with three gruelling days of rowing at Victoria Lake in Germiston.

The St John’s College rowers performed well, especially the U16s where the Scull and Pair returned with gold and the Four and Eight earned themselves silver and a 4th spot respectively.

St John’s College Rowing Coach Barry McNiece was very pleased by the effort put in by the boys this season so far and as well the hard work put in by all the other coaches: “It was a great weekend for the rowers. The boys have performed to the best of their abilities throughout the season but the standout performance from this weekend came from the U16s in their small boats. A big thank you to all the coaches as well for a great season and all their hard work throughout.”

U/15: Quad Silver and Oct Silver 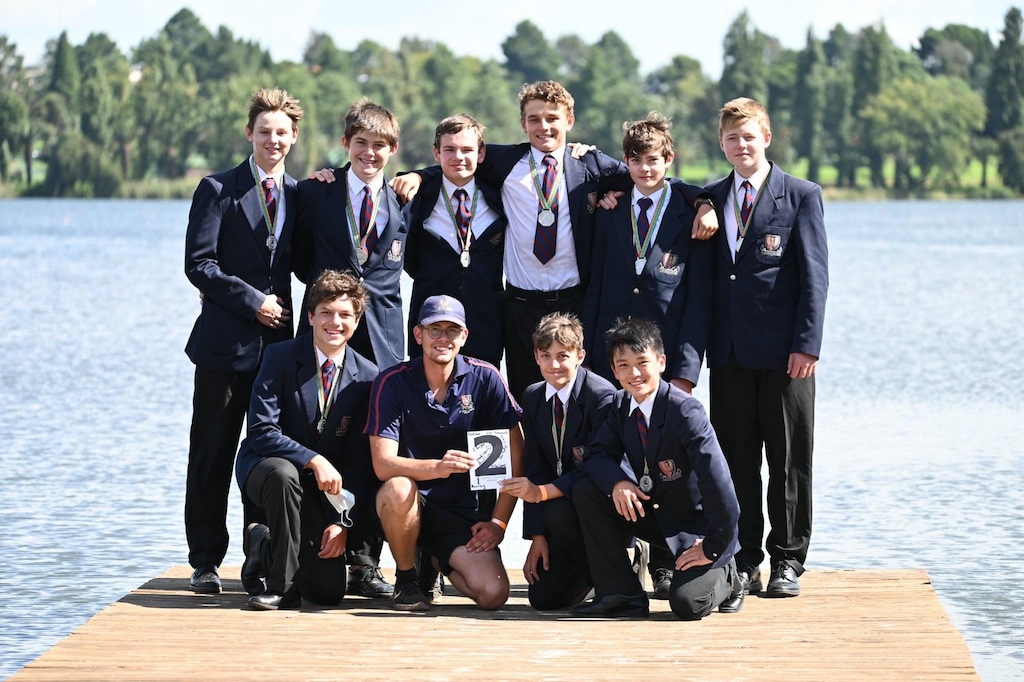 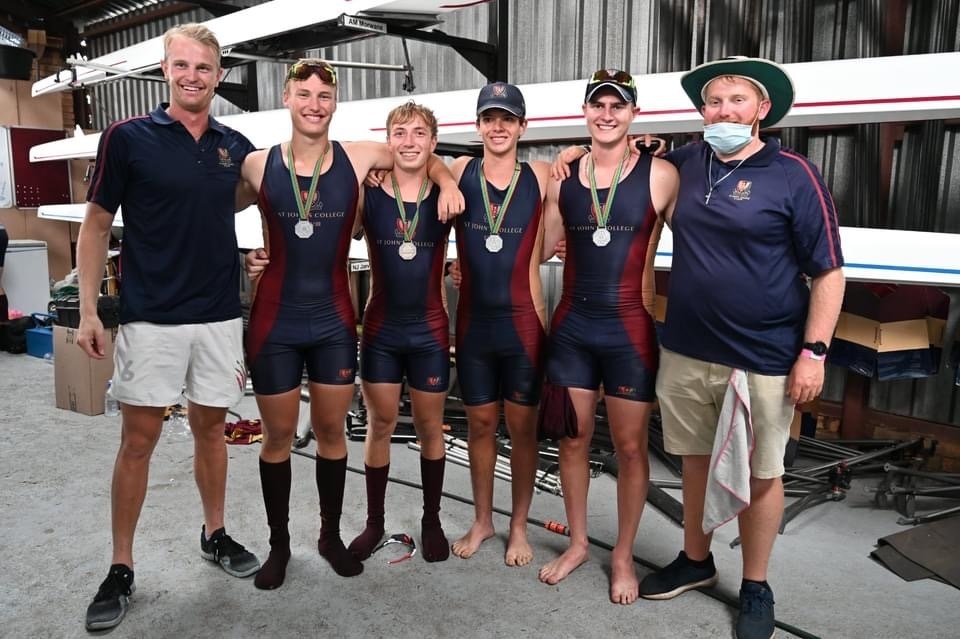 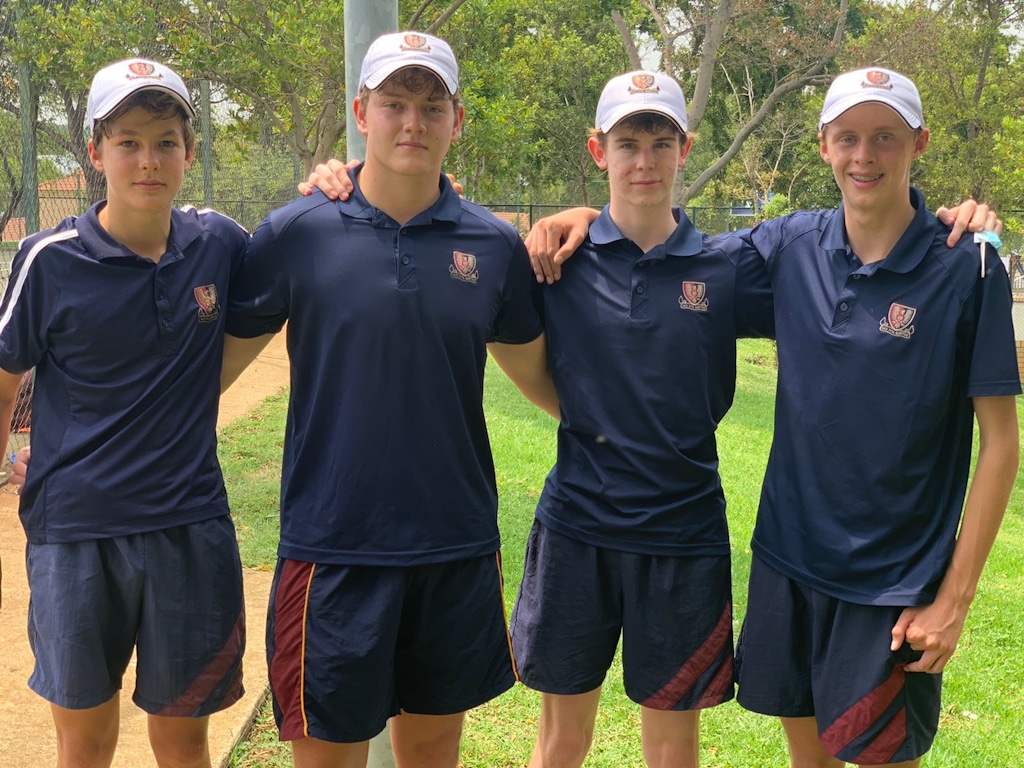 The St John's First Team Tennis competed in the Senior Inter-High School Tennis Tournament hosted by St Stithians College on Saturday 5 March. The boys played against the best schools in the province to emerge fifth out of 24 schools. 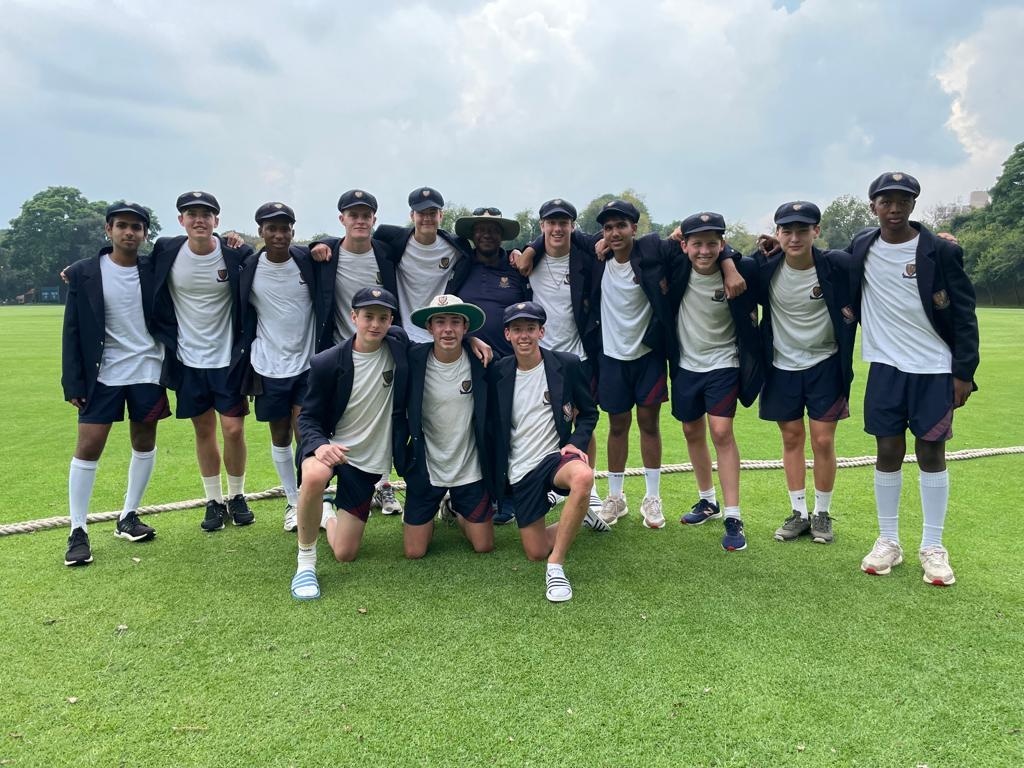 The U16A Cricketers ready for their game against Parktown Boys' that was called off.

The end of the Easter Term cricket season

The St John’s College cricket season concluded this past weekend on Saturday the 5th of March, with all A teams playing some very good cricket.

There were some superb individual performances throughout the day on Saturday against Parktown Boys High School, more in particular Luke Francis with his 118 run knock for the first team, whilst Jonathan Tait was in fine form with willow in hand in the second team, notching up 109 runs with his teammate Tyler Rhodes scoring 70 in the same game. Darshik Lutchman came right in the U14A with the bat as well with his 126 run contribution, whilst Nkosana Sibiya was a part of the high scoring party in the same game with his well-played 131 runs. Alec Loveland and Malan Du Plessis bowled particularly well for the U15A team, with Loveland returning with figures of 5/5 and Du Plessis with 4/11.

Mr Adrian Norris, the MiC Cricket and First-Team coach, was impressed with the effort put in by the boys over quite a complicated season filled with disruptions: “The season was a successful one despite being disrupted by a lot of rain. We hope will not be a factor in Michaelmas term.”

Despite the weather disruptions to the season, there were plenty of positives that can be drawn from the season not just from a team perspective but also from an individual perspective. There were some great performances from the boys in the lower teams and also over 7 hundred’s scored throughout the teams. The number of five-wicket hauls was also quite impressive despite the disruptions.

(The game was called off due to bad weather)

(Game called off due to bad weather)

(Game called off due to bad weather)