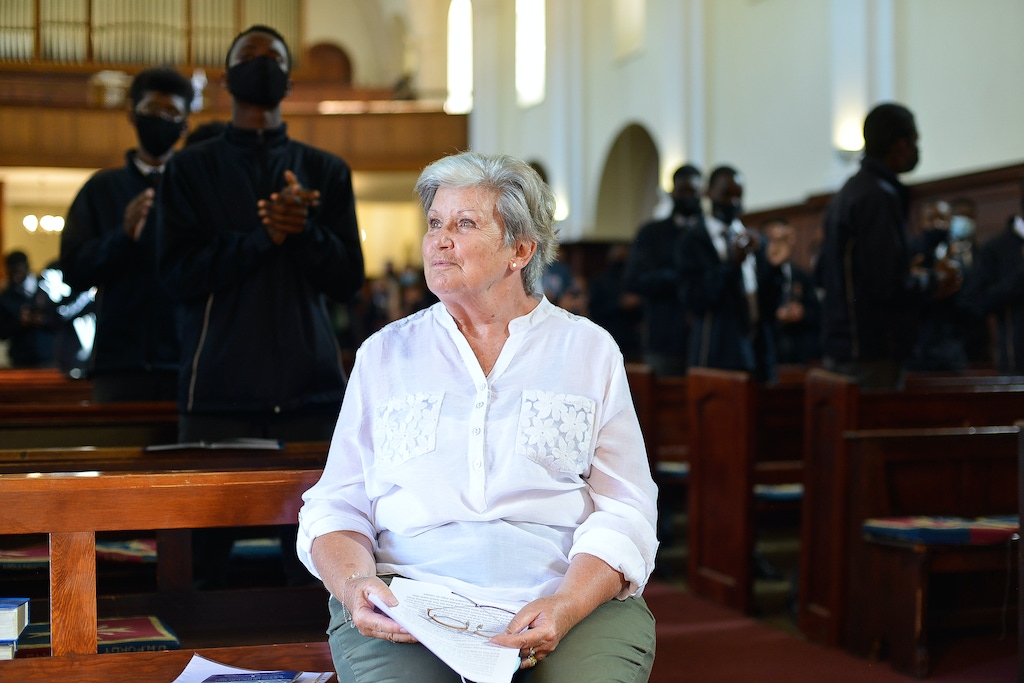 The meaningful contribution made by Mrs Agnes Nugent, Head of the St John's College Academy and the Centenary Scholarship Co-ordinator, was celebrated at a special farewell tea at the end of Michaelmas Term.

Mrs Nugent retires after a long and illustrious career. She joined St John's College as Head of the St John's College Academy in 2012 after retiring as Principal of Barnato Park High School, where she was integral in setting up the community partnership programme between the two schools. During her time at St John's, she has strengthened the Academy and encouraged, supported and cared for “her boys” with firmness and kindness. Her philosophy has always focussed on the importance of developing young men who are empowered, not entitled.

Mr Paul Edey, former St John’s Headmaster, together with academy alumnus Mr Npolo Ngoywa, paid tribute to the Mrs Nugent we have all grown to know and love.

She started teaching at Barnato Park High School in 1992 and was promoted to Head of Department the following year. "Because of my experience in the commercial world, and the fact that I graduated as a mature student, I was quickly promoted to management," she said. Mrs Nugent was appointed Acting Principal of Barnato Park in 1997 and Principal in 1998. Barnato Park remains one of the biggest inner-city schools in Johannesburg, with more than 1 000 students from Hillbrow and surrounds. Despite the immense social difficulties facing the students at Barnato Park High School, she maintained a high standard of education, exemplary discipline, and a varied extra-curricular programme.

In 1998, with the assistance of the Anglo American Chairman's Fund, Mrs Nugent set up a Safe House on the Barnato Park property for children at the school who had intolerable home lives. "It has been proven over the years that, as soon as children feel safe, have shelter and regular meals, their marks improve," she said.

She was able to accommodate 16 boys and girls each year. "There was never a guarantee of funding from one year to the next, but somehow I managed to keep the Safe House going." Mrs Nugent was the sole fundraiser, shopper and mentor to the hundreds of children that have lived there from its inception until its closure at the end of this year.

"Agnes is a doer, not a talker and her idea of community partnerships is to build something which is mutually beneficial and sustainable. Agnes is deeply involved and knowledgeable about the community directly to the south of St John’s College," said Mr Edey.

At St John's, she has led, directed and grown the Academy programme for the past eight years, supported by a wonderful team of St John's College teachers.

Mrs Nugent has been dedicated to understanding the personal circumstances of every student in her care and ensured they were supported to achieve their goals. She became familiar with the potential of each student and was not afraid to be tough when required, fighting for them to translate their potential into action.

In 2018, the Academy celebrated its 10th anniversary. One highlight of the birthday celebration was the acclaim Mrs Nugent received from her many Academy graduates. Among the guests were young men who had graduated as engineers, mathematicians, economists, architects, IT specialists and actuaries, with many still studying on the bursaries they received through the Academy. Some of these students had lived in the Safe House Mrs Nugent had established at Barnato Park 22 years ago. Many had benefitted from her assistance with career guidance, university applications, NSFAS funding applications, bursaries, internships and learnerships.

"During my time at the Academy, we enjoyed many fun and educational trips and attended camps each year. I was able to do things I had never imagined. Mrs Nugent has played such a significant role in the lives of inner-city students. On behalf of the many students who have been blessed with her presence in their life, I would like to say a big thank you and wish her a happy retirement," said Mr Ngoywa.

During the COVID-19 lockdown period, many of the Academy families faced untold challenges as parents lost jobs or were unable to work and families struggled to put food on the table. Mrs Nugent appealed to the St John's College community and, through their generosity, she set up a fund which enabled St John's to provide families with a stipend for food, as well as provide data for the students, especially the matrics, to continue learning online.

More recently, Mrs Nugent added the role of Centenary Scholarship Co-ordinator to her portfolio, where she extended the same care and kindness to these young men of the College.

“Mrs Nugent, we salute you as you step down from the leadership of the St John’s College Academy. The young men you have nurtured and developed are testimony to your care and love for the youth of this county and the surrounding community. Your legacy is remarkable,” said Stuart West, Executive Headmaster.