The COVID-19 pandemic has necessitated the reimagination of what would have been the 109th annual Gaudy Day. "But it is not the first time that supervening global events has wreaked havoc with plans for Gaudy Day festivities," writes Dr Daniel Pretorius, Chairman of the Heritage Committee

The Old Johannian Association was formed in February 1903. The founders of the Association formulated its objects as being mainly to retain contact with all who had been students at St John’s, and to organise OJ cricket and football teams. The Headmaster, the Revd Mr Hodgson, encouraged the old boys to practise cricket in the school nets.

At that stage, the College was a mere four and a half years old. Moreover, the Anglo-Boer South African War (1899 – 1902) had dictated the closure of the school for about a year from May 1900 until April 1901. As such, the College’s old boys were not yet very numerous. The average age of the members of the OJA committee was only 16 and a half years, which is indicative of the fact that boys then tended to leave school much earlier than has since become customary.

In the years following the Anglo-Boer War, enrolment at the College dwindled as a result of the colonial government’s creation of the ‘Milner schools’, which attracted boys away from St John’s. The College’s struggles had a detrimental impact on the vitality of the OJA, which (like the school itself) seemed to be in terminal decline.

The Anglo-Catholic brethren of the Community of the Resurrection came to the rescue. At the beginning of 1906, they took charge of the floundering little school. As alumni of historic English boarding schools, they understood the importance of old boys’ organisations in the ensuring the vigour and longevity of such institutions. Accordingly, the new Headmaster, Fr James Okey Nash, prioritised the revival of the OJA and the cultivation of strong links between the College and its old boys.

A ‘Past v Present’ cricket match soon became an annual event. The College’s first match against the OJs was played at the Old Wanderers (in the vicinity of the present Park Station) on Thursday 5 April 1906. The encounter resulted in a nine-wicket drubbing for the boys.

At a meeting of the OJA later that year, the proverbial hat was passed round and members funded the purchase of a cricket bat and ball as prizes for the best batsman and bowler of the year among the College boys. These prizes have continued to be awarded annually ever since.

Thanks to its great benefactor Sir Thomas Cullinan, the College relocated from downtown Johannesburg to Houghton in 1907. The Past v Present cricket match was played at the new Houghton grounds on 23 March 1907. The OJs won by ‘a few’ runs.

The OJA held its first annual dinner on the evening of 12 September 1908 – ten years after the founding of the College. The event took place at Luthje’s Langham Hotel in Kerk Street, and was attended by ‘nearly thirty’ old boys. The proceedings were chaired by the Venerable Archdeacon Furse (Chairman of the College Council), who exhorted the OJA to ‘be vigorous and strong, always prepared to lend a helping hand to the School. The Council and the masters … need the staunch support of parents and friends – and particularly of Old Boys.’

After the dinner, Fr Clement Thomson CR commented: ‘Again and again the Old Boys have given a helping hand to their old school … and we are confident that they will in future take every opportunity of showing their practical interest in the school and giving it many a push on.’

The first Gaudy Day (in those days called ‘the Old Boys’ Gaudy’) was held on Ascension Day, 16 May 1912. Fr Nash had suggested that the annual reunion day be called a ‘Gaudy’. ‘The name,’ he explained, ‘given to college commemorations in Oxford, comes from gaudeo, meaning, for we all know Latin here, “rejoice”.’ The day’s proceedings commenced with a choral celebration at St Aidan’s. The Bishop delivered a sermon holding up the ideal of a school and school life.

Mass was followed by a procession to the school’s new sanatorium, which was blessed by the Bishop. The OJs recorded a 2-1 victory over the College in the Past v Present football match. The Old Boys’ dinner was again held at the Langham Hotel; this time, some forty OJs were present.

In 1913, Gaudy Day was again held on Ascension Day (which in those days was a public holiday). As had become customary, the school and the OJs went to St Aidan’s for choral Eucharist, followed by an address by the Bishop. The College scored a goal in extra time to win the football match against the OJs 3-2. After tea, a concert was held in the gymnasium (now Big School). The Old Boys’ dinner, for which there was ‘a goodly muster of some 70’, was held in the school dining room, with catering arranged by Mrs Luthje of the Langham Hotel.

Thus developed the tradition of holding the annual Gaudy Day on Ascension Day. Much the same pattern has been followed at Gaudy Days ever since. However, when Ascension Day ceased to be a public holiday the event perforce had to be moved to a Saturday around the same time of year.

The Bishop delivered the sermon at the service in St Aidan’s Church on 21 May 1914. ‘In the pages of History,’ he said, ‘there are the names of great nations who, because they used their greatness and might to crush and exploit smaller and weaker nations, had been by God’s judgment thrown aside on the scrap-heap. We must then use the great opportunities and privileges we have inherited for the good of others less fortunate than ourselves.’ Afterwards, before the Past v Present football match, the memorial tablet dedicated to the late Mr Rakers in the entrance arch to the present Prep building was unveiled. 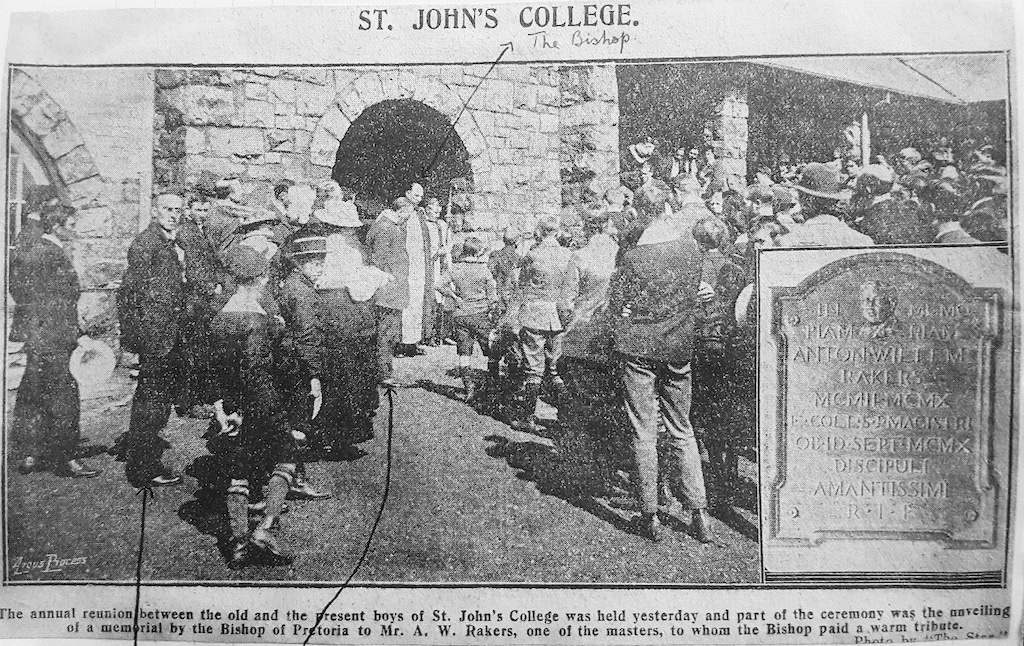 In 1916, the OJA decided to arrange an abridged Gaudy Day because so many OJs were away on active military service in the First World War. The annual dance and dinner, which had become part of the Gaudy Day proceedings over preceding years, did not take place. The service at St Aidan’s Church did, however, proceed as usual, as did the annual Past v Present football match. The OJs thrashed the boys by 12 goals to nil. ‘Such a thing has never happened before,’ lamented Fr Nash. Later in the year, though, the College boys had the last laugh, winning the annual cricket match against the OJs by five wickets.

The new Science Block (today the French and Divinity classrooms on the north side of David Quad) was dedicated on Gaudy Day in 1919. Sir Evelyn Wallers (President of the Chamber of Mines) officially opened the new block. He alluded to the ‘pressing problems of reconstruction facing the country and the world,’ and expressed the hope that the new laboratory would stimulate ‘that taste for science and scientific research which is of immense importance to our nation.’ 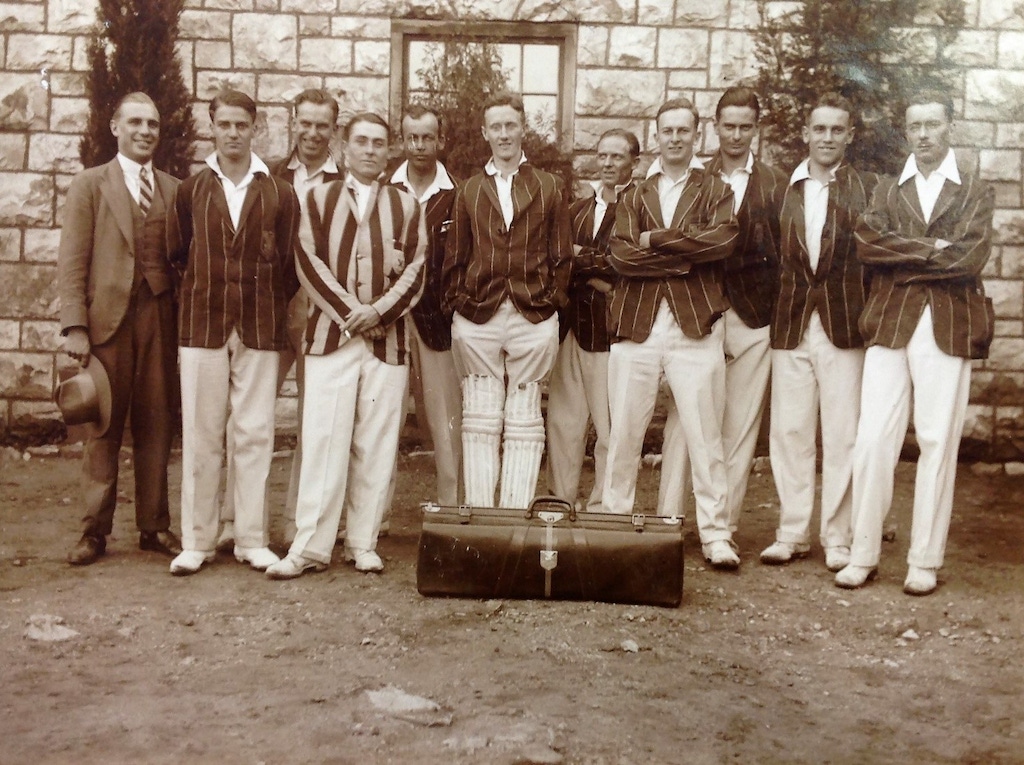 Old Johannians cricket XI, 1929 (Ronnie Grieveson is padded up, and Bruce Mitchell stands two places to his left, with his arms folded)

On the occasion of the 1931 Gaudy Day, a ceremony was held during which the Delville Wood Cross, which had been kept in the Crypt Chapel since 1924, was transferred from the Crypt Chapel to the Memorial Chapel. Detachments from the regiments in which OJs had served in the First World War assembled in the Amphitheatre together with OJs, relatives of the fallen, members of staff and parents. St John’s College cadets formed a guard of honour. The band of the Imperial Light Horse accompanied the singing of ‘O God Our Help in Ages Past’.

The inaugural College v OJs rugby match was played at Gaudy Day in 1932. The OJs won 19-0. In the hockey matches, the OJ 2nd XI defeated the College 2nd XI 13-0. ‘Many were the handshakes and loud the chatter round the tea tables in the quad afterwards, and the great stone buildings, in all their splendour, were filled with old boys who proudly visited very part, and especially the [new] clock tower overlooking the vast expanse of country rolling to the blue mountains of Magaliesberg.’ 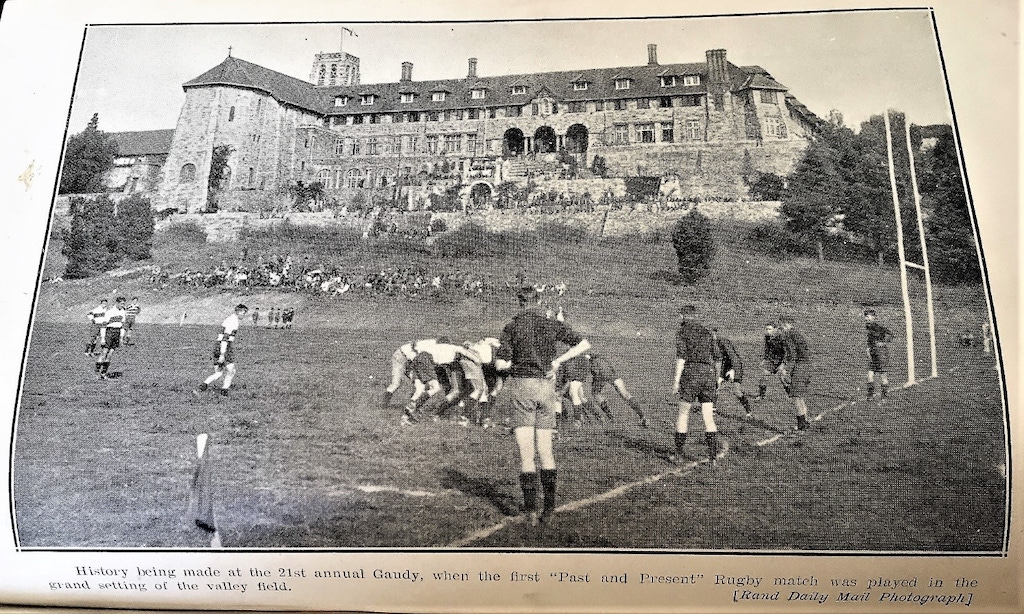 World War II interfered with Gaudy Day events – but it did not stop OJs marking the event. Indeed, so determined were OJs to celebrate their loyalty to the College that about thirty OJs incarcerated in a prisoner-of-war camp at Modena in Italy arranged their own Gaudy Day in 1942 so that they could be with the school and their fellow OJs in spirit. Lieutenant-Colonel Eric Thompson OJ was the leading light in making these arrangements. The OJs played basketball matches against SACS old boys imprisoned in the same camp.

In 1948, Gaudy Day had to be cancelled due to a severe poliomyelitis pandemic. By way of an alternative to Gaudy Day, many OJs descended on the school towards the end of the year for the College’s semicentennial jubilee. Holy Communion was celebrated in the Memorial Chapel, cricket matches were played between the OJs and the College, and there was a large attendance at Evensong.

At Gaudy Day in 1955, an OJ choir, directed by Mr Noel Iverson, participated in the sung Eucharist for the first time. Thus started a great Gaudy Day tradition.

In 1956, another polio epidemic caused the Medical Officer of Health to cancel school sport. As a result, no sports matches were played between the College boys and the OJs on Gaudy Day. Instead, teams of OJs played tennis, squash, hockey and rugby against each other.

St John’s College’s diamond jubilee celebrations were held in 1958. A broadcast entitled ‘The First Sixty Years’ was made on the SABC radio service to mark the event. Gaudy Day drew the largest attendance in the school’s history. Celebratory dinners in ‘the largest marquee ever erected in South Africa’, on Burger Field, were attended by 2,600 guests.

The practice of presenting Golden Eagle Awards on Gaudy Day was introduced in 2004. The first recipient of the Golden Eagle Award (bestowed on OJs who have made significant lifetime contributions to society) was Dr Ian Player. On the same occasion, honorary awards were made to former Headmaster Mr Deane Yates and his wife Dot. In 2005, the award was made to the cellist Kutlwano Masote OJ.

The author is grateful to the College archivist, Ms Jenni Millward, for her assistance in collating material used in writing this article.